President Aoun meets Mikati, briefed by Bou Habib on outcome of his visits to Brussels, New York and Washington 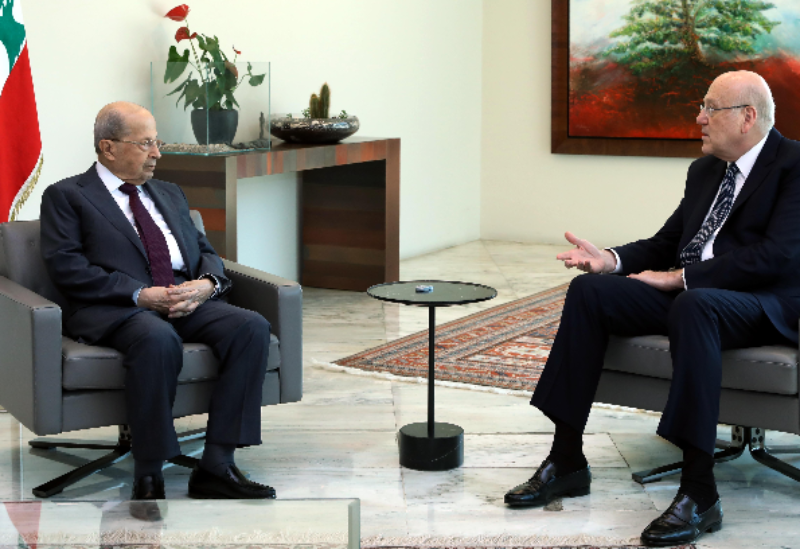 The meeting also discussed what happens once the Cabinet is considered resigned, and how departments must continue to secure the necessary tasks.

President Mikati merely responded to a question after the meeting by saying, “It is a routine visit to His Excellency the President, and I am always friendly with him.”

President Aoun Foreign Minister, Abdullah Bou Habib, and was briefed about the visits he made late last month to Brussels, New York and Washington.

After the meeting, Minister Bou Habib made the following statement:

“I was honored to meet His Excellency the President to inform him of the visits I made late last month to Brussels, New York and Washington, where I spoke about the Syrian displacement to Lebanon and delivered a speech at a conference devoted to this purpose.

I stressed that Lebanon can no longer tolerate the presence of a million and a half displaced Syrians on our land, and they are not political refugees, but economic and security refugees, and the Syrian regime is ready to accept their return without any punishment or any problem.

The Europeans are still without a road map to end this battle, and we, in the absence of any road map for the end of this situation, will not accept to cooperate with them in keeping the displaced people where they are with us, and all we want from international organizations that pay for the displaced Syrians to stop paying them in Lebanon, but rather in Syria after they return.

It is true that we are today under a caretaker government, but we are in complete agreement in Lebanon that this situation should not continue”.

Question: What prevents reaching an agreement?

About the issue of importing gas, the Foreign Minister said: “I have talked about the issue with the World Bank, and they are ready to start financing the importation of electricity from Jordan. There are some obstacles with regard to gas, and the Egyptians have a very large field and it has a future in terms of selling gas extracted from it. It’s important to them, and they’re asking for waivers, which will take some time to get done, and we’re on the way to that”.

Minister Bou Habib also pointed out that “The obstacles are legal, which requires some time in order to take the right path”.

About the extent to which our embassies abroad are affected by the delay in diplomatic formations, Minister Bou Habib replied: “On the contrary, the outside is not affected. They are happy because they are staying abroad. And who is not happy with that, are the diplomats here who want to go abroad, where there is a difference in salaries between here and abroad.

There are no problems in diplomatic missions abroad, but there are some problems in the ministry here”.