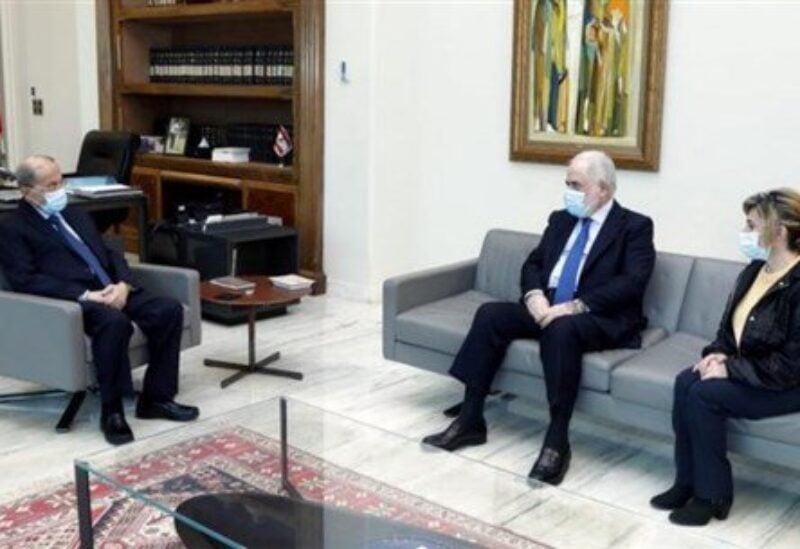 President of the Republic, General Michel Aoun, discussed the general situation on Friday with the Papal Ambassador to Lebanon, Monsignor Joseph Spiteri, after Pope Francis’ recent visit to Iraq and the impact that the region has left in general, and his focus on the importance of dialogue between the various components.

Monsignor Spiteri pointed out that the Holy See “is currently interested to find a solution to form the government and carry out reforms, without forgetting the fight against corruption, which Pope Francis has always mentioned, and the President is convinced of this path to fight corruption”.

On the visit of Pope Francis to Lebanon, Monsignor Spiteri said, “There is no date yet for this visit. I think you have heard what Pope Francis said, as he is convinced and he wants to come. We have to prepare the matter”.

After the meeting, the Papal Ambassador made the following statement to journalists:

“I was honored to meet His Excellency the President of the Republic and we deliberated the regional situation, especially after the visit of the Holy Father Pope Francis to Iraq, who gave hope to our Iraqi brothers and sisters, Christians and other sects. The matter was an example to the entire region. I hope that it will be with regard to Iraq and Lebanon. We have also witnessed the importance of Pope Francis’s meeting with Ayatollah Sistani, in addition to his prayers in Mosul, in the heart of devastation. He responded to the hatred with a message of peace, solidarity and brotherhood.

I spoke with His Excellency about the importance of dialogue. You will remember that Pope Francis always stresses, whether in the Human Fraternity Document he signed in Abu Dhabi or in his various teachings, on dialogue that should be the basis for all our activities, not only between different religions and their leaders, but also within the same family and among politicians, especially in order to reach a solution to form the government. I wished to reach a speedy solution to this issue.  Pope Francis always mentions it, and even the president of the republic is convinced of the conduct of the anti-corruption course.

We also touched on the Human Academy for meeting and dialogue that was adopted by the United Nations, and the support of various countries for it. But unfortunately, because of the pandemic, the matter took place, as well as with regard to the issue of tourism and spiritual tourism, where there were a lot of projects. We are looking forward to regaining momentum”.