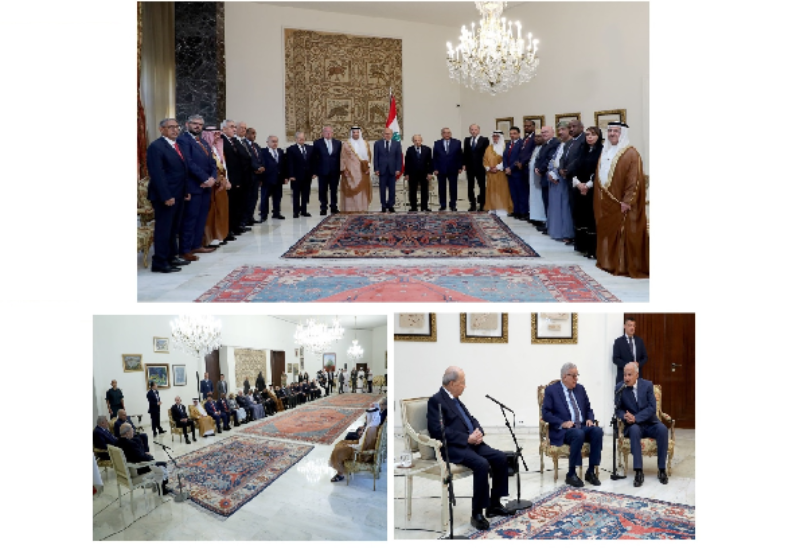 General Michel Aoun, president of the republic, emphasized the “importance of Lebanon’s dedication to its fraternal connections with the Arab brothers, particularly the countries of the Gulf Cooperation Council.”

President Aoun continued, “The Lebanese always look forward to the return of the Arabs to Lebanon.”

The President thanked the State of Kuwait in particular for its ongoing support for Lebanon, particularly during the challenging crises it is currently experiencing, and emphasized that “The Lebanese government is committed to taking the necessary measures required to enhance cooperation with the Gulf Cooperation Council countries, following the Kuwaiti initiative to heal the rift.”

President Aoun’s positions came while meeting Kuwait’s Foreign Minister Sheikh Dr. Nasser Al-Mohammed Al-Sabah, who came to Lebanon, along with a number of Arab foreign ministers to participate in the consultative meeting of the Council of the League of Arab States, which is being held in Beirut.

The Kuwaiti Foreign Minister conveyed a message from the Crown Prince of Kuwait, Sheikh Mishaal Al-Ahmad Al-Jaber Al-Sabah, in which he praised “the historical ties that unite our two brotherly countries” stressing “the common aspiration to strengthen them and raise the frameworks of cooperation between them to broader horizons for their interests”.

Meeting:
At the beginning of the meeting, the Kuwaiti minister thanked the President for the reception, conveying to him the greetings of the Emir of Kuwait, Sheikh Nawaf Al-Ahmad Al-Jaber Al-Sabah and the Crown Prince, “and their pride in the relations between Kuwait and Lebanon, and in the brotherly relations with your Excellency, as well as in the continuous communication between the two countries, the two leaderships and the two peoples”.

The Kuwaiti Minister also conveyed the Kuwaiti leadership’s congratulations on holding the parliamentary elections and naming a prime minister to form the Lebanese government.

Minister Al-Sabah said: “I convey the Kuwaiti leadership’s thanks and gratitude to your Excellency, the Lebanese government and the Lebanese people for responding to the Kuwaiti initiative, which we thank God has now established a new situation”.

“We are present after six months in this good land with this hospitable people, at the Arab consultative meeting, which reflects the importance of Lebanon’s existence as a founder of the League of Arab States, and its pivotal role” Minister Al Sabah said.

Minister Al Sabah also noted “The coordination that exists between Kuwait and Lebanon, whether with regard to bilateral, regional and international issues.

Then, the Kuwaiti minister conveyed to President Aoun an invitation from the Kuwaiti Prince to visit Kuwait, looking forward to “achieving this visit soon”.

President Aoun:
For his part, the President welcomed Minister Al-Sabah and the accompanying delegation in Lebanon, to participate in the consultative meeting of the Arab League Council.

President Aoun said: “We are always grateful to Kuwait and the Emirs who succeeded in its leadership, as well as to the Kuwaiti people, for their always standing by Lebanon, in times of crisis”.

“I know how close the Kuwaitis are to the Lebanese and they consider Lebanon their second home” President Aoun added hoping to meet the invitation that was sent to him to visit Kuwait.

The President also stressed that “There was a determination to hold the consultative meeting in Lebanon, despite the difficulties we are experiencing” wishing all success for the meeting and for the conclusions that will be reached.

President Aoun reiterated that “Since the Kuwaiti initiative was presented, Lebanon has viewed it with great appreciation, noting the positive steps that have taken place and the tangible and steady improvement of relations with the Gulf states in all fields, especially with the return of ambassadors”.

The President appreciated “The personal efforts made by Minister Al-Sabah in this field.”

“We are counting on you a lot to maintain Kuwait’s leading role in its relations with Lebanon” President Aoun concluded.