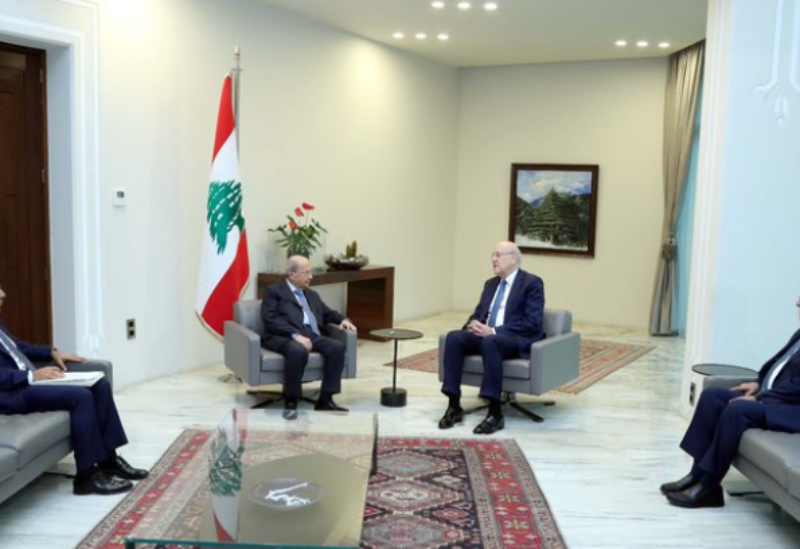 Following the meeting PM Mikati made the following statement:

“I met with His Excellency the President, the meeting was related to the recent understanding that took place regarding the maritime borders. The meeting was good and His Excellency and the working group conducted a final reading of the memorandum of understanding, and in light of it, I believe that His Excellency the President will address the Lebanese in this regard, marking a stage that will be, God willing, a good one, a word of thanks must be addressed first to the Lebanese working group that devoted themselves to studying this agreement, starting with Deputy Speaker of Parliament, Elias Bou Saab, and Major General Abbas Ibrahim, Professor Ali Hamdan and Professor Antoine Choucair.

Thank you also to the American administration, which made a great effort to reach this agreement, and a thank you to the French government and the French president in particular for what they have done in the last hours, with regard to Total and the success of this agreement.

Prime Minister Mikati added: “This morning a meeting took place with Total company in the Serail and we agreed to start the excavation process as soon as the memorandum of understanding is completed. Currently, a final reading is underway by the work team and there are some small details related to translation into Arabic.

His Excellency the President will address at the Lebanese tonight or tomorrow.

Appreciation for the good news to the Lebanese about the beginning of a new phase that we hope will bring good to Lebanon, after we have passed through a difficult phase. We must also thank the army and the Hydrography Department, which made a great effort with the Lebanese technical team to reach this result.”

Question: What is the Lebanese position on the expected vote at the United Nations regarding the Ukrainian crisis?

PM Mikati: The vote will be tomorrow, within the context that the Lebanese government has taken since the beginning of the Ukrainian crisis.