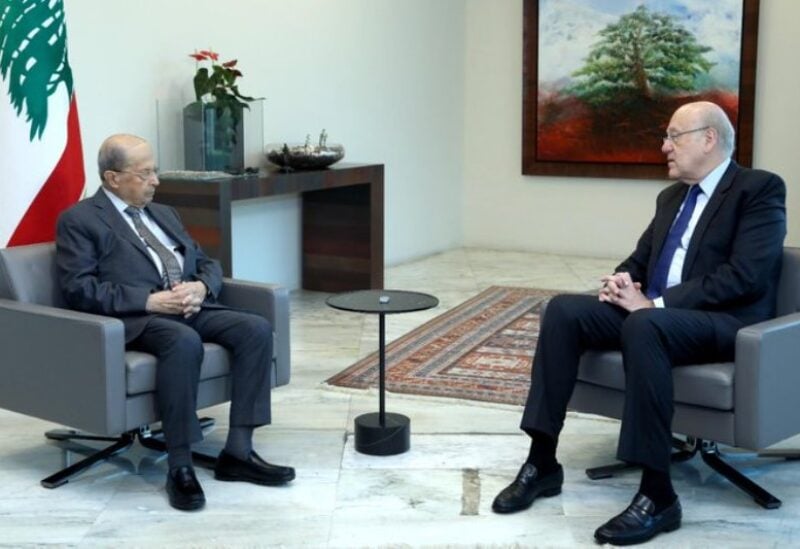 President Michel Aoun met with Prime Minister Najib Mikati today at the Presidential Palace to discuss the general situation, particularly in light of the meetings held by Maronite Patriarch Mar Bechara Boutros Al Rahi yesterday, as well as relations between Lebanon and the Gulf countries and ways to strengthen them in all fields.

After the meeting, President Mikati said:

“My meeting today with His Excellency the President lies within the normal context of the routine meetings that we hold. We tackled several topics today, especially the initiative of the Patriarch that he made yesterday after his visit to His Excellency the President and to Speaker Berri and me as well. We hope that it will see the light soon, leading to the resolution of the issue of stopping the work of the Council of Ministers, and its return to convening. We are keen, Mr. President and I, that we all return to the Cabinet table, so that the search is on this table to find the required solutions, but the most important thing today is to clear the atmosphere and to correct the judicial track which should be completely purified, according to the laws in force and the constitution.

During the meeting, we also touched on what was circulated yesterday about the interview that was recently broadcast to the Minister of Information, and it was recorded more than a month before the formation of the government.

His Excellency the President expressed, as I emphasized on my part, that this interview reflects the minister’s personal opinion, and not the opinion of the government nor the opinion of His Excellency, and we are keen on the best relations with Arab countries.

What the Information Minister said will not affect the general course, especially since the constants of the Lebanese position on relations with Arab countries were mentioned in the ministerial policy statement.

His Excellency the President has emphasized this issue, and here I am stressing our one position that this statement does not represent the government’s opinion, but stems from a personal opinion before the government was formed and we did not hear about it, as the interview was broadcast yesterday.  This is the path that we have decided, in the sense that we are eager for the best relations with Arab countries, and we hope that this issue will be resolved”.

Answer: “It is better not to mix things up, but to deal with each issue individually.  On the issue of reconvening the Council of Ministers, we seek through contacts to bring the Council back to the meeting, while the judiciary plays its role without any political interference with the judicial body, which has to correct the course within the constitution and laws, and this is our demand.

As for the events in Tayouneh, the investigation is taking place in it, and the Council of Ministers will return to the meeting soon as a result of the consultations that we are carrying out”.