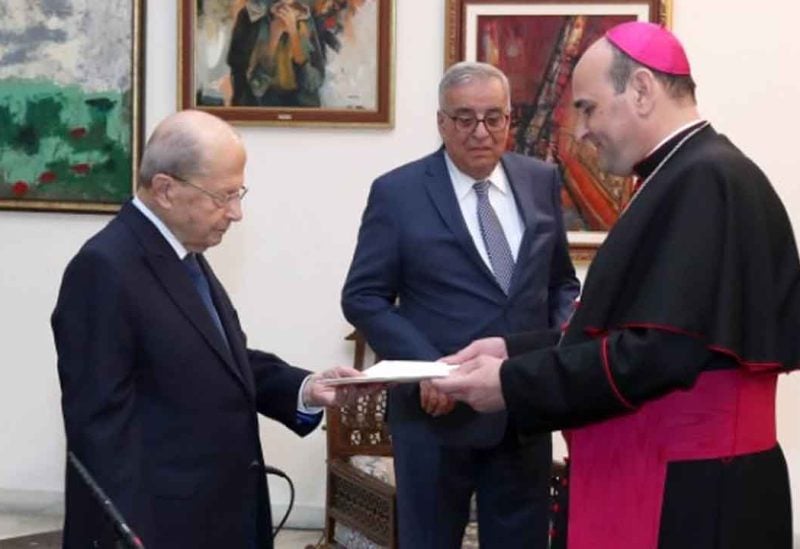 Then, the ambassador of each country saluted the flag before being accompanied by the Republican Guard Brigade.

Ambassadors then entered the salon of October 22 amid two rows of spears, and from there to the ambassadors’ salon to present his credentials to President Aoun, and to introduce him to the members of the diplomatic mission.

Upon leaving, the army’s music played the Lebanese national anthem.

During the ceremony, the ambassadors conveyed to President Aoun the greetings of their Presidents, and stressed working on everything that would strengthen bilateral relations between their countries and Lebanon.

For his side, the President conveyed his greetings to the ambassadors’ Presidents, stressing in return Lebanon’s keenness to strengthen relations with their friendly countries for the benefit of Lebanon, their countries, their people and the Lebanese.

The following is a brief biography of the ambassadors who presented their credentials today:

– Holds a doctorate in canon law.

– Entered the diplomatic department of the Holy See on December 1, 2001, and moved in several positions in the missions and embassies of the Holy See in: Central Africa, Mexico, the Holy Land, Cyprus and Lebanon.

-Worked in the Departments of Relations with States and Public Relations of the Secretariat of State in the Vatican City.

-On September 3, 2019, His Holiness Pope Francis appointed him Bishop of Milazzo and Papal Ambassador.

-Holds a PhD in Education from the University of South Carolina, in the United States of America.

-Worked in the Scientific Research Council as Director of Research in the Education and Human Resources Sector.

-Appointed as an ambassador in his country’s Ministry of Foreign Affairs, and was attached to the Department of the Minister’s Office.

-Transferred to his country’s embassy in Washington, before he was appointed head of the Sultanate of Oman’s mission to the United States of America.

-In 2021, he was assigned to supervise the economic affairs sector.

Dean and members of the Honorary Council:

President Aoun met with the Dean of the Council of Honors, the Director-General of the Presidency of the Parliament, Mr. Ali Hamad.

The meeting was also attended by members: Director-General of the Presidency of the Republic, Dr. Antoine Choucair, Secretary-General of the Council of Ministers, Mr. Adnan Daher, Brigadier General Michel Abu Rizk, and Brigadier General Ali Makki, in the presence of the Protocol Director at the Presidency of the Republic, Dr. Nabil Shedid.

Dr. Shedid briefed the President on the work of the Council and the criteria it adopted within the framework of its interest.

For his side, President Aoun praised the performance of the council since its formation.