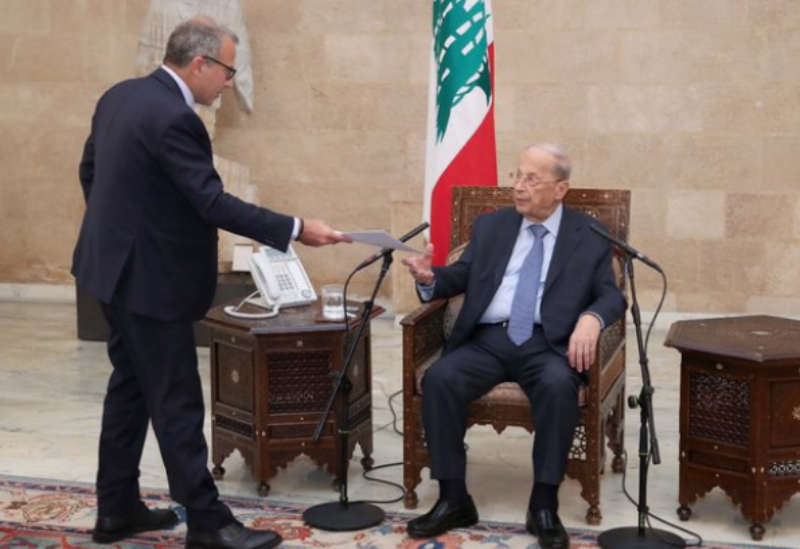 President Michel Aoun supports any movement that results in the election of a new president, and he has a strong loyalty to this aim before everything else, according to MP Gebran Bassil, the chairman of the “Strong Lebanon” bloc.

“We will strive to intensify our movement in this direction” MP Bassil said.

MP Bassil also considered that what was new in what had been reached regarding the demarcation of the southern maritime borders was not only the affirmation of Lebanon’s right, but rather that everything possible should be done to facilitate and start drilling operations and to prevent any matters that could prevent or delay this, which could lead Lebanon out of financial captivity.

During the meeting, the achievement of demarcating the southern maritime borders was discussed.

After the meeting, MP Bassil made the following statement:

“We were honored to visit the President of the Republic with a parliamentary delegation to inform him and hand him the presidential priority paper on the basis of which we are conducting a round of contacts and meetings in order to try to agree on a candidate who adheres to these ideas and has positions in support of them regardless of his powers.

This is because as we know it is necessary for the President of the country to have a clear position on issues which we have proposed and we will not repeat.

Certainly, the President is with any movement that leads to the election of a new President of the Republic and has a strong adherence to this priority before anything else, and we will strive to intensify our movement in this direction.

For us, there is at least a basis for discussion that we can talk to every candidate or person interested in this issue.

As for the second matter that has imposed itself today as a basic entitlement, it is the achievement that has taken place on the issue of maritime borders. We recalled with President Aoun the long path that we lived 12 years ago until we reached here.

I repeat that we are not about to sign a border agreement, but rather we are working on two things: borders and rights, and rights not with water or fish, but with oil and gas, and therefore this agreement is sovereign on one hand, related to borders, and economic and financial because it is related to oil and gas.

We did it in order for Lebanon to become an oil country, otherwise it would have been done, as happened in 2011, by sending a notification letter only to the United Nations with the line and coordinates. But today, the agreement deals with most of the reservoirs in which gas is located, such as Qana and others, and all the issues related to it and where there is new in it.

Emphasis is not only on Lebanon’s right, but on doing everything possible to facilitate and start drilling operations in Lebanon and to prevent any things that could prevent or delay this.

Therefore, the importance of what happened lies in the fact that it removes Lebanon from the financial captivity that falls under its burden and puts us on path if we continue to walk in it according to the contracts and laws governing this gas resource, we will be protecting our economy as we protect this resource.

I go back and remember that we have reached where we are because a law has been passed and decrees have been passed, and all of our sea has been surveyed on an area of ​​22,000 square kilometers, in a two- and three-dimensional way, so that we can touch the places where we can have wealth. There was also an appointment of the Petroleum Sector Authority, and to those who talk about the bodies, I say that we are the first to appoint a commission and it worked and proved the result of its work.

There were also tenders and there were contracts, and what is missing is the Sovereign Fund Law to ensure how the money is used, which allowed us to negotiate with countries and companies so that we can start the extraction process.

It is good that this presidential term began in the first session of the Council of Ministers and its first item was the adoption of decrees that prevented us from approving them in 2016 for four years, on the sovereign and legal line that our Lebanese people deserve”.