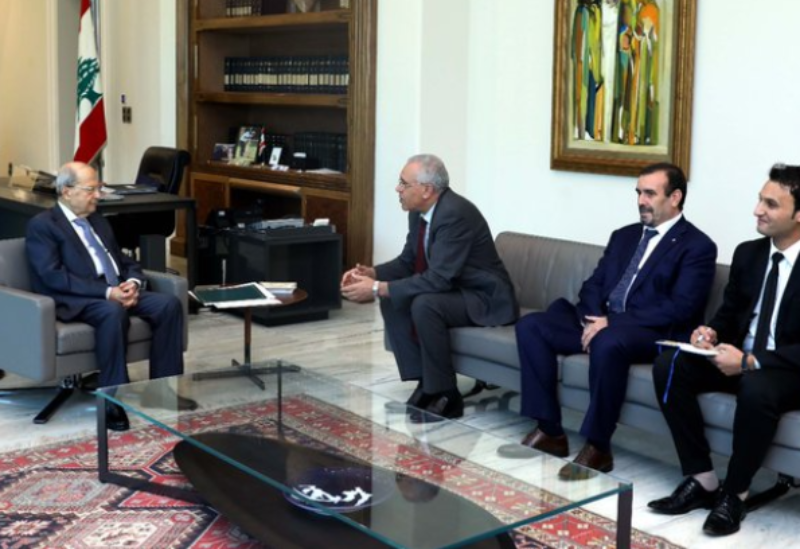 General Michel Aoun, President of the Republic, has received an official invitation from the President of the People’s Democratic Republic of Algeria, Abdelmadjid Tebboune, to attend the thirty-first regular session of the League of Arab States Council at the summit level, which will be held in Algeria on the first and second of November next year.

The invitation was conveyed by the Algerian Justice Minister, Mr. Abderrachid Tabbi, in the presence of the Algerian Ambassador in Beirut, Abd al-Karim Rakibi, and the advisor at the Algerian Ministry of Foreign Affairs, Mr. Mohamed Merimi.

In the invitation letter, the Algerian president expressed his hope that President Aoun’s participation in the summit “will be an effective contribution to its success, based on the pioneering role of the brotherly Lebanese Republic as one of the founders of the Arab League and its history full of noble positions and sincere efforts in defending the issues of our Arab nation, foremost of which is the Palestinian cause.

President Tebboune added: “Algeria is honored to host this important Arab event, in light of the delicate circumstances our nation is going through, and the challenges it faces, especially those caused by the increasing tensions on the international scene.

“Algeria also counts a lot on the strong participation of brotherly Lebanon, in  appreciating this renewed date, intensifying consultation and coordination in order to unify our word, enhance the values of solidarity between us, and direct our joint efforts for the good of our countries and peoples, present and future” the Algerian President continued.

The Algerian minister had also conveyed to President Aoun the greetings of President Tebboune and his wishes for him and Lebanon for good luck, pointing out that his country is looking forward to Lebanon’s participation in the summit, which will be an occasion to gather the Arabs’ speech in a framework of consultation and coordination.

For his part, President Aoun thanked the Algerian Minister for conveying the invitation, and expressed his greetings to President Tebboune.

The President also expressed his appreciation for the support provided by Algeria to Lebanon during the difficult circumstances that Lebanon went through, especially after the explosion that occurred in the port of Beirut.

The meeting also tackled Lebanese-Algerian relations and ways to develop them in all fields, in addition to the relations between the Arab countries.

In this context, President Aoun wished Algeria success in organizing the summit after a break of three years, especially since Algeria chose a date for the summit as a glorious occasion, the Algerian revolution.

Finally, the President wished success for the Algerian diplomatic endeavors, which are working to provide the essentials for success of the summit, which is being held at a time when the Arab countries are facing crucial issues that require reunification.