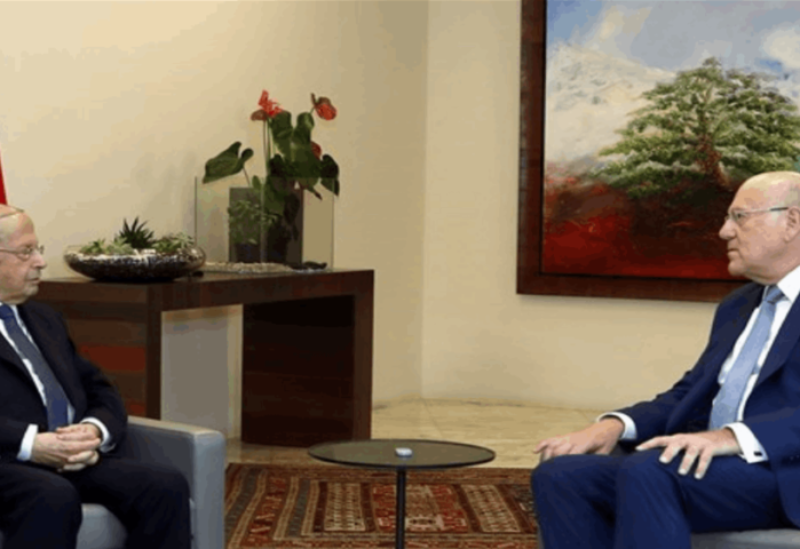 The President was briefed about the talks held in Amman, on leasing gas from Egypt to Lebanon, through Jordan and Syria.

After the meeting, the Energy Minister made the following statement:

“I briefed His Excellency, about the talks which took place in Amman during the quadripartite meetings between, Lebanon, Jordan, Egypt and Syria, with an escort from the World Bank regarding the import of Egyptian gas through Syria and Jordan to Deir Ammar power plant in northern Lebanon.

Deliberations were very fruitful and it was agreed on a specific timeline for reactivating the agreements signed between the four countries in 2009 after their evaluation and completion of all technical procedures related.

It was also agreed on the following:

-Conducting a survey by each country on its facilities to ensure safety, ability to absorb gas and readiness for cooperation, in addition to submitting a report in this regard within a three-week period.

-Initiating discussions with the World Bank and the Arab Republic of Egypt to evaluate contracts and agreements and to determine quantities, prices and time periods for each agreement.

-Asking the World Bank to help find solutions to the issue of financing through a guarantee of payments for a short period.

-Requesting the World Bank to assist in obtaining necessary exceptions from the US administration to facilitate the progress of this project.

In response to a question about the time period required to start implementing this project, Minister Ghajar clarified that it takes around three weeks to verify technical matters. “On our part, we have to make sure that Deir Ammar plant is ready for reception. After a period of 3 weeks, each country submits a report and determines whether it needs a longer period for processing. On the other hand, as Lebanese Energy Ministry, we will start working with the Egyptian Energy Ministry, as well as with the World Bank so that we can prepare the agreement which is still valid” Ghajar said.

“However, there is a difference in prices and in quantities required as well as in the time period. The issue of financing remains the most important, that is, how will the payment be made? Because gas is a product which is priced in US dollars, and the World Bank is helping in this issue. It is possible between 2 or more months to come up with proposals for solution, which the Lebanese government must approve. So, it may take about two or three months to prepare for this issue, depending on the conditions of gas lines” the Energy Minister continued.

Question: It is said that the Lebanese market will run out of gasoline, and no credits have yet been opened, so what do you think about this issue?

Answer: “All fuel kinds are present, and we are still trying to use the remaining balance of 225 million dollars to price the quantities of gasoline at the official price. Gasoline will not be cut off within a week. We are discussing with the Central Bank to reach the possibility of opening credits in the next stage. Exchange platform, or on the dollar rate?, This matter has not yet been decided”.

On the issue of lifting fuel subsidies, which has become an obsession for the Lebanese citizen, especially in how to secure generator electricity bills in the event it occurs, Minister Ghajar pointed out that lifting the subsidy is not taken by the Ministry of Energy, but rather is a governmental decision. “And the last exceptional decision taken was to open all the credits in a way that the citizen pays the value of the dollar at the price of 8000 pounds per dollar, and the Ministry of Finance bears the price difference, and the exchange rate of the dollar in this case is estimated at approximately 16,000 pounds. The Central Bank finances the credits according to this figure”.

Moreover, Minister Ghajar stressed that the rise in prices affects citizens due to the deterioration of their purchasing power, pointing out that the issue of support and exchange rate determination does not belong to the Ministry of Energy, but rather based on a government decision that says that fuel credits are at this or that price. “As a ministry, our role is limited to pricing based on an agreement that defines the method of subsidy” Ghajar concluded.