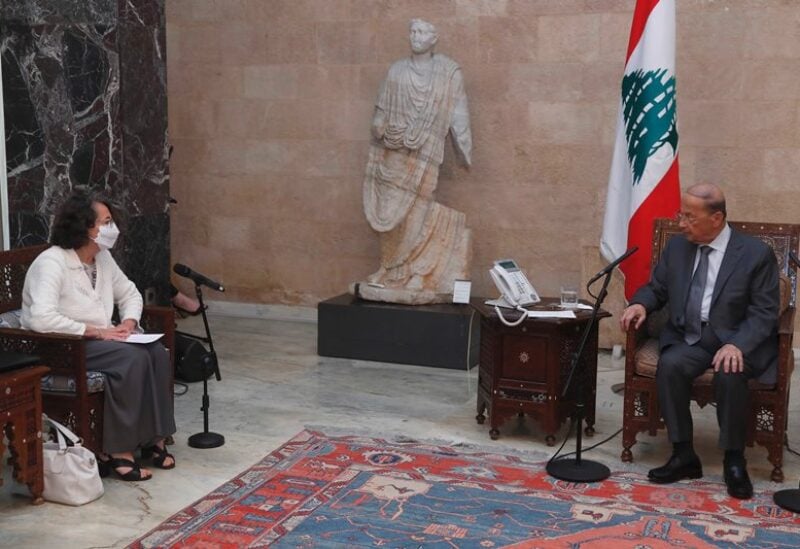 President Aoun stressed that “The formation of a new government is currently a priority in our political work, despite internal and external obstacles facing this issue”.

“However, we will spare no effort to reach this goal and form a government which achieving required reforms will be among the first of its tasks, in addition to completing the fight against corruption which Lebanon suffers from and accomplishing forensic audit which constitutes the real point of entry to these reforms” the President said.

In addition, President Aoun emphasized the “Need of support from countries friendly to Lebanon, especially Italy, Lebanon’s quest to recover the funds which were smuggled abroad, especially to European banks”, pointing out that “Combatting corruption restores regularity to the state’s economic structure, in all departments and institutions”.

The President also assured Mrs. Sereni that “Democratic practice in Lebanon is safeguarded despite all difficult circumstances which the country passes through, and this will be translated into the upcoming parliamentary and municipal elections, which will be held on time in 2022”.

Moreover, President Aoun thanked Mrs. Sereni for the Italian support in all fields, especially after the Beirut Port explosion, and the implementation of developmental projects, in addition to the Italian participation in UNIFIL forces which Italy leads. President Aoun noted the historical relations which link Lebanon and Italy and asserted the need to activate these relations, considering Italy’s initiative to restore Sursock Museum, which was damaged by the Beirut Port explosion, as an “Additional confirmation of Italy’s cultural presence in Lebanon, which also asserts the common belief between both countries in preserving heritage and common values”.

For her part, Mrs. Sereni briefed the President on Italy’s position on recent Lebanese developments, and stressed the continuation of her country’s support in current circumstances.

Mrs. Sereni also emphasized the need of strengthening cooperation between both countries, in multiple fields.

After the meeting, Mrs. Sereni made the following statement:

“Long-term historical and cultural friendships, link Italy and Lebanon. We are with the Lebanese people in these difficult times which have been exacerbated by Corona pandemic. I affirmed Italian solidarity with Lebanon, and I assured the President that it will remain as it is, through our work within the framework of the international support group, at bilateral and international levels. Italy had acted immediately in response to the emergency call, after the Beirut Port explosion. We have sent teams of experts and provided financial and first aid equipment, as well as field hospitals.

I also assured his Excellency, of Italy’s commitment to reconstruction. In this context, an agreement was signed yesterday with the UNESCO Director, to rehabilitate the Sursock Museum, where the Italian government contributes an amount of one million Euros. We assert the importance of the framework agreement which works in the name of reform, advancement and reconstruction, especially regarding accompanying Lebanon in the process of advancement while actively involving civil society and encouraging effective coordination between international donors.

During the meeting, we also agreed with President Aoun that Lebanon finds itself today in the face of many challenges, especially on financial, humanitarian and economic levels. The answer to this multidimensional crisis is one: carrying out reforms. Therefore, profound and structural reforms must be undertaken to respond to the most urgent needs of the Lebanese. These reforms cannot be postponed any longer, and require the formation of a government which assumes full authorities.

Therefore, Italy reiterates its urgent call to Lebanese political parties, to set aside their differences and prioritize the country’s supreme interest, and cooperate in order to form a new government which would put Lebanon back on the track of sustainable development and follow the paths of reform, while relaunching IMF negotiations.

Italy also supports any initiative which would contribute to overcoming the current stalemate, bearing in mind the need to protect the population and improve all living conditions. The European Union, which studies all means at its disposal, can take a balanced and effective step in this context. I also consider that it is extremely important that democratic mechanisms continue to operate regularly, and this is why I emphasized to the President the need to work according to the electoral calendar, expected in 2022.

We also discussed bilateral relations and some regional topics. It was emphasized that Italy portrays Lebanon as a key player for Middle Eastern peace and stability. It was also assured that Italy is convicted to support UNIFIL. The best proof of this is Italy’s long-term contribution in peacekeeping missions, where more than 1000 Italian soldiers serve.

The UNIFIL, under the leadership of General Stefano Del Col, continues to play a key role in maintaining stability and avoiding tensions along the Blue Line borders, especially in light of the current situation with its tensions at this stage.

We are very proud that Italian blue hats continue to be highly professional and humane at serving the cause of peace in this sensitive region, daily, side by side with local communities and the most vulnerable segments of the population”.

The President also met MP, Cesar Abi Khalil, and deliberated with him the current situation and governmental affairs, in addition to the needs of Aley region.