President Aoun: We refuse to see Lebanon as transit point for what could harm brotherly Arab countries, especially KSA and Gulf states 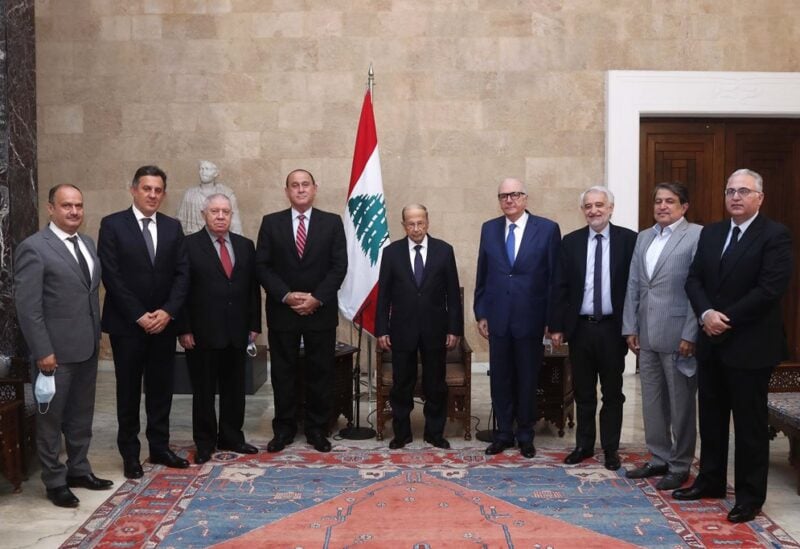 President of the Republic, General Michel Aoun, emphasized that he refuses that “Lebanon is a transit point for what could harm the brotherly Arab countries in general, and Saudi Arabia and Gulf states in particular, given the strong ties which Lebanon binds with these countries”, asserting that “These countries have always stood by Lebanon’s side in various circumstances which the country had witnessed”.

“KSA is a brotherly country and we are interested in preserving the existing economic cooperation with it. Today, we are exerting great efforts to uncover the circumstances of what happened and put things back on the right track” the President added.

Positions of President Aoun came while meeting Industry Minister, Imad Hobballah, who was accompanied by a delegation of members of the Board of Directors of the Industrialists Association, today at the Presidential Palace.

At the beginning, the Industry Minister pointed out to the importance of local industrial production in this period, especially since industry is the sector which is mostly capable of continuing, in light of the current harsh economic crisis which we are experiencing. Minister Hobballah also enumerated the difficulties which this sector faces, especially regarding the failure of the BDL to secure necessary funds for factories, and the Dollar rate crisis. “These are attempts to strike what is remaining of the Lebanese production and economy, which is unacceptable, especially as it restricts the process of local industrial production” Minister Hobballah said.

In addition, the Industry Minister tackled the latest developments in the field of exporting agricultural goods after the recent decision taken by KSA in this field, where he stated the importance and necessity of addressing this issue and correcting matters by punishing those involved.

“Protecting Saudi security is also our responsibility as Lebanese, and it should be achieved through cooperation with Saudi authorities. I hope to work to tighten control through Customs and in various state institutions who are concerned in this matter, so that smuggling operations be controlled. This affects our relations with brotherly countries, thus inflicting serious economic repercussions on Lebanon” Hobballah concluded.

Afterwards, the association’s Vice President, George Nassrawi, emphasized the role which industry plays in the national economy, considering that it is the main productive sector, and an entrance to the socio-economic solution.

“Industry preserved job opportunities in very difficult circumstances in which Lebanon complains of increased poverty, unemployment and scarcity in resources. Through industry, incomes are secured for families, and these families will not seek and request aid from the government” Nassrawi said.

“Industry also secures essential life supplies and basic consumer goods for citizens in terms of foodstuffs. It is the main source for the introduction of hard currencies into the country, through its exports abroad. These exports estimate to around $ 13 billion annually, including 10 billion for the local market and 3 billion exports” Nassrawi continued.

Then, Vice President Nassrawi listed the association’s demands, most prominent of which are:

-Refusing to put controls and limitations on export operations to ensure the return of money, which constitutes a blow to exports, industry and economy, in addition to providing banking facilities to secure the import of raw materials (Amounting 100 million USD).

-Rescheduling the debts owed by industrialists to banks, with acceptable interest rates which reflect the current market benefits in Lebanese Lira or foreign currency.

-Confronting the attempts of some countries to promote their products in foreign markets as being of Lebanese manufacture.

-Reviewing some unfair trade agreements against Lebanon before the Arab facilitation agreement to which Lebanon is bound and which the Arab countries aren’t.

-Lifting the damage resulting from BDL Circular No.2020 / 568 to pay off bank loans in the loan currency.

For his part, the President welcomed the delegation, and asserted support for industrialists’ demands and all measures which would help in preserving and developing this sector.

President Aoun also addressed the problem which occurred with the Kingdom of Saudi Arabia, and stressed that he refuses that “Lebanon be a transit point for what could harm brotherly Arab countries in general, and Saudi Arabia and Gulf countries in particular, given the strong ties which bind Lebanon with these countries which have always stood next to Lebanon in different circumstances”.

“KSA is a brotherly country. We are interested in preserving the existing economic cooperation with Saudi Arabia and today we are exerting great efforts to uncover the circumstances of what happened and return matters to the correct path. The Interior Minister has been assigned to follow-up this issue with competent Saudi authorities, and it seems there is an understanding. We hope to reach solutions” the President said.

Finally, President Aoun indicated that the measures taken at Monday’s meeting, at Baabda, will be implemented, and “Security apparatuses will tighten control over the export movement from Lebanese land, sea and air facilities to reassure countries that receive Lebanese agricultural and industrial products”.