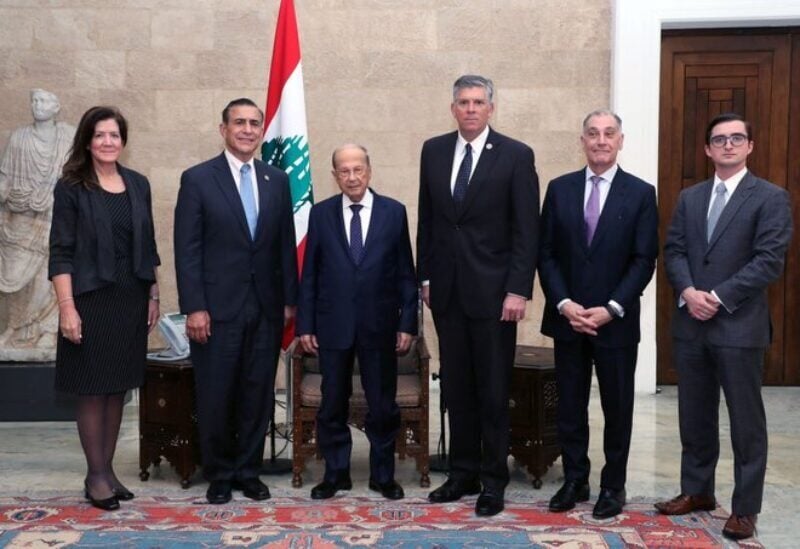 Michel Aoun with a Congress delegation

President of the Republic, General Michel Aoun, met an American delegation, including members of the US Congress Daryl Issa and Darren Lahoud, the head of the American Support Group for Lebanon (Task Force for Lebanon) and Ambassador, Ed Gabriel.
The meeting was also attended by the US Ambassador to Lebanon, Dorothy Shea, and members of the American Support Group for Lebanon.
The President told the delegation that “Lebanon began its journey out of the severe economic crisis which it lives in, which resulted from accumulations dating back several years, by preparing a program to negotiate with the International Monetary Fund to obtain loans from donor countries, while working on reforms that include the financial and banking system after determining debts and losses whose equitable distribution will restore the country’s financial balance”.
President Aoun also pointed to the importance of reorganizing the state’s structure, looking into the tax system, controlling spending, preventing waste, and following up on work to combat corruption, which had a negative impact on the public treasury
The President stressed that Lebanon looks forward to the United States’ support for the reform programs that the government will adopt, thanking the American delegation for the humanitarian, development, health and educational aid provided by the United States, whether to official departments and institutions, or to the Lebanese army and military forces.
Moreover, the President praised the role played by the US administration in facilitating the process of importing gas and electricity from Egypt, Jordan and Syria, given the positive repercussions that this work would have to secure electricity in Lebanon.
In response to the delegation members’ questions, President Aoun affirmed Lebanon’s commitment to implementing UN Security Council Resolution 1701, and pointed to the violations committed by Israel from time to time for the inclusions of this resolution, stressing that “Lebanon looks forward to resuming indirect negotiations to demarcate the southern maritime borders, while awaiting the return of the American envoy, Amos Hochstein, to complete the talks that began with the aim of reaching an agreement that guarantees Lebanon’s right to invest its natural resources in the border oil and gas fields.l”.
In addition, President Aoun asserted the existing understanding between him and Prime Minister Najib Mikati on the issues raised and the need to implement the reforms that Lebanon needs, considering that the current conditions the government is going through will not continue and the Council of Ministers will reconvene soon.
Then, President Aoun stressed the commitment to constitutional obligations, whether in the Parliament or the Presidency of the Republic, emphasizing the importance of the separation of powers and the independence of the judiciary and the need to distance politics from it, especially in the investigation of the crime of the Beirut Port explosion and the bloody events that occurred in the Tayouneh-Ain El-Remmaneh area.
Congress delegation members, Daryl Issa and Darren Lahoud had conveyed to President Aoun the interest of the US Congress in the situation in Lebanon, and its keenness to continue providing aid to the Lebanese civil and military institutions.
Issa and Lahoud also pointed out that the members of Congress look forward to the role of the President of the Republic at this delicate stage in the history of Lebanon, and they are interested in reviving the Lebanese economy, the regular functioning of the constitutional institutions, and enabling Lebanon to use its natural resources to strengthen its economy, achieve the desired reforms, and reduce the emigration of its sons.
Afterwards, the head of the US ITFL Support Group for Lebanon, Ambassador Ed Gabriel, spoke about the group’s work with the US administration and Congress to strengthen and develop US-Lebanese bilateral relations in all fields, focusing on the support that the delegation can provide for the new governmental directions.
The meeting was attended by Messrs. Issa Lahoud, Gabriel and the American ambassador, member of the board of directors of the support group, Mr. Mohamed Ahmar, and one of its officials, Mr. James McClellan.