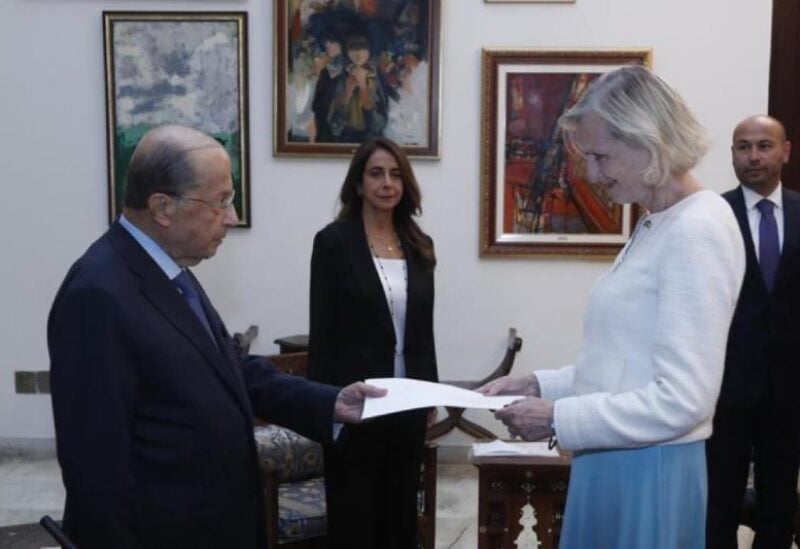 The approved rituals were held as the Ambassadors arrived at the Presidential Palace one by one. The anthem of the country represented by each Ambassador was performed by the army’s music, and the flag of each nation was raised alongside the Lebanese flag on the Palace’s mast.

After that, each Ambassador saluted the flag before entering the October 22 salon in the middle of two rows of spears, and then to the Ambassadors’ salon, where each Ambassador presented his credentials and the diplomatic mission members to President Aoun.

Upon their departure, after presenting the credentials, the army music played the Lebanese national anthem.

Ambassadors conveyed to President Aoun the greetings of their Presidents, and wished him success in his national responsibilities, assuring him to work to strengthen relations between Lebanon and their countries.

For his part, the President conveyed his greetings to the ambassadors and their heads of state, wishing them success in their new diplomatic missions.

Ambassador of the Kingdom of Sweden, Mrs. ANN DISMORR:

– Joined her country’s Ministry of Foreign Affairs in 1981, and has headed the mission of her country’s embassy in Lebanon since September 2020.

-Assumed the position of Director of the Middle East and North Africa Department between 2015-2020.

– Assumed the position of diplomatic advisor to the Swedish special envoy to peace negotiations between the Israelis and the Palestinians.

– In 2008, she published a book about Turkey and its relations with Europe and the Middle East. From 2012-2014, she held the position of Director of UNRWA in Lebanon.

– Fluctuated in several positions, including her country’s ambassador to Somalia, Rwanda, Burundi, Seychelles and Comoros.

-Held the position of Head of the International Department of the Swedish Parliament between 2006 and 2009.

– Worked as a consultant to her country’s mission to the United Nations in Geneva, between 1995-1999, and was concerned with human rights.

-Holds a Ph.D. from Yale University in Political Science, and a Bachelor of Arts from Stockholm University.

-Holds a master’s degree in law.

-Fluctuated in several positions, as he worked as an employee in his country’s Ministry of Foreign Affairs between 1997-1998.

– Appointed attache to the Chinese Embassy in Lebanon between 1998-2002

-From 2002 to 2006, worked as an attaché, third secretary, and deputy director of a department in the Chinese Foreign Ministry’s West Asia and North Africa Department.

-From 2013 to 2015, he served as an advisor at his country’s embassy in the United States of America.

-Holds a Bachelor’s degree in Arts from the University of the Philippines’ College of Arts and Languages in the Department of English Language and Literature.

-Has a master’s degree in national security administration from the same university’s National Defense College.

-Had a lot of ups and downs in various management positions.

-Served as Third Secretary and Deputy Consul at his country’s embassy in the Kingdom of Saudi Arabia from 1999 to 2002.

-He served as second secretary and consul of his country’s mission in Indonesia from 2003 to 2005.

-He served as first secretary and general consul of his country’s embassy in Brunei from 2008 until 2011.

-He was director of the Southern Europe Department of the European Affairs Department in his country’s Ministry of Foreign Affairs between 2014 and 2016.

-He has been the Executive Director of the Middle East and Africa Office in the Ministry of Foreign Affairs of his country since 2017.