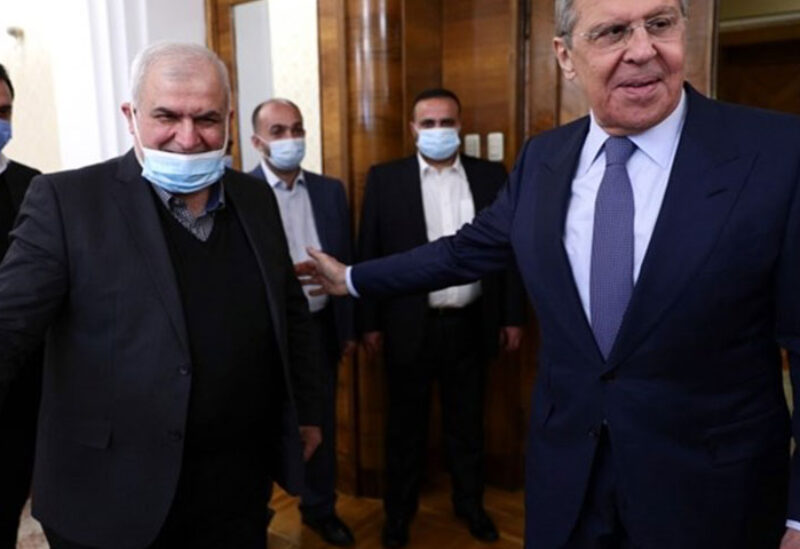 Russia’s foreign minister discussed with a delegation from the militant Hezbollah group which paid a rare visit to Moscow on Monday, the situation in Lebanon and the Middle East.

The visit by the four-member Hezbollah delegation comes as Lebanon is mired in its worst economic crisis in decades and stuck in political stalemate over the formation of a new Cabinet.

Russia and Iran-backed Hezbollah joined Syria’s conflict fighting alongside President Bashar Assad’s forces and helped tip the balance of power in his favor.

Russia’s Foreign Ministry said Sergey Lavrov met with the head of Hezbollah’s parliamentary bloc, Mohammed Raad, but didn’t give any details on the meeting.

Raad was quoted by Hezbollah’s Al-Manar TV station as saying after the 40-minute meeting that they had a “friendly and frank meeting.” It added that they discussed the situation in Lebanon and how to “strengthen stability in Lebanon and Syria and the achievements that were made against terrorists.”

The Syrian government, Russia and Hezbollah refer to some insurgent groups in Syria as terrorists.

Raad said that a new government should be formed quickly in Lebanon because this “will be the key for stability and to begin solving the crisis.”

Russia has recently been more active in dealing with Lebanon and Lavrov last week during his visit to the United Arab Emirates met with Lebanon’s Prime Minister-designate Saad Hariri.

Lebanon’s worst economic and financial crisis began in late 2019 and was made worse by the pandemic and a massive blast at Beirut’s port in August that killed dozens and wounded thousands.

Hariri was chosen to form a new Cabinet in late October but so far political bickering and disagreements between him and President Michel Aoun have delayed the formation.

The international community has said it will not give Lebanon financial assistance before major reforms are implemented to fight widespread corruption in the tiny country.