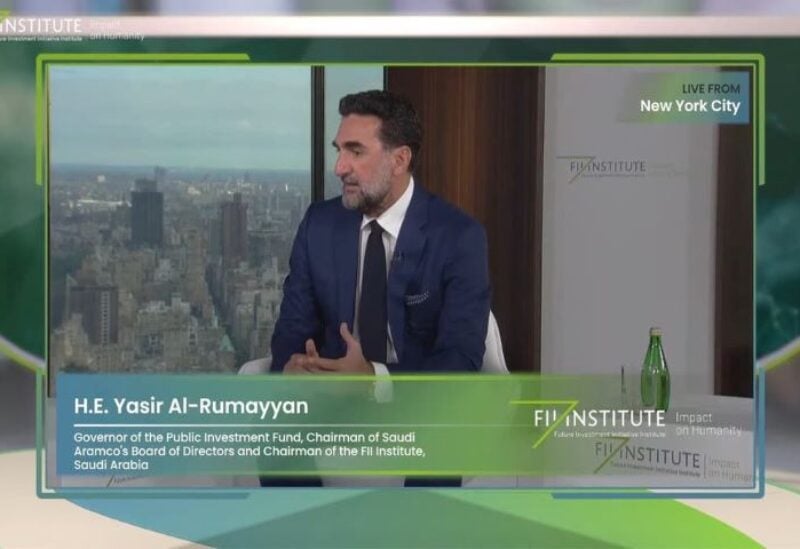 Yasir al-Rumayyan, Governor of the Public Investment Fund and the Chairman of Saudi Aramco

The governor of the Kingdom’s Public Investment Fund (PIF) and Saudi Aramco chairman said during an FII Institute roundtable in New York that Saudi Arabia aims to deploy 50 percent of its investments in renewable and sustainable power sources.

“The Kingdom aims to deploy 50 percent of its investments in renewable and sustainable power sources, more than two-thirds from investment. We are one of the most efficient countries when it comes to sustainability and renewable energy,” said Yasir al-Rumayyan.

Al-Rumayyan was speaking on Tuesday in New York during a Future Investment Initiative (FII) Institute “Health is Wealth” hybrid event held alongside the 76th session of the United Nations General Assembly (UNGA).

“Most of the Saudi population today is under the age of 35, and we really want to think about the future. You cannot separate health from economies and from sustainability. We focus on the future generations of Saudi Arabia,” the Aramco chairman said.

Al-Rumayyan also said that Saudi Arabia is one of the most efficient countries when it comes to sustainability and renewable energy.

“FII is committed to exploring the most urgent challenges facing the world today, with sustainable, renewable, and health-focused solutions. PIF and Saudi Arabia are committed to sustainability not only for environmental purposes but also to improve the well-being of humans,” he said.

Al-Rumayyan confirmed that any future partnerships will have sustainable goals and work in accordance with initiatives such as the Saudi Green Initiative.

The PIF governor added that the cost of renewable and solar power in the Saudi Arabia currently stands at 1.2 cents per kilowatt/hour (kWh), compared to 15 cents for other producers.