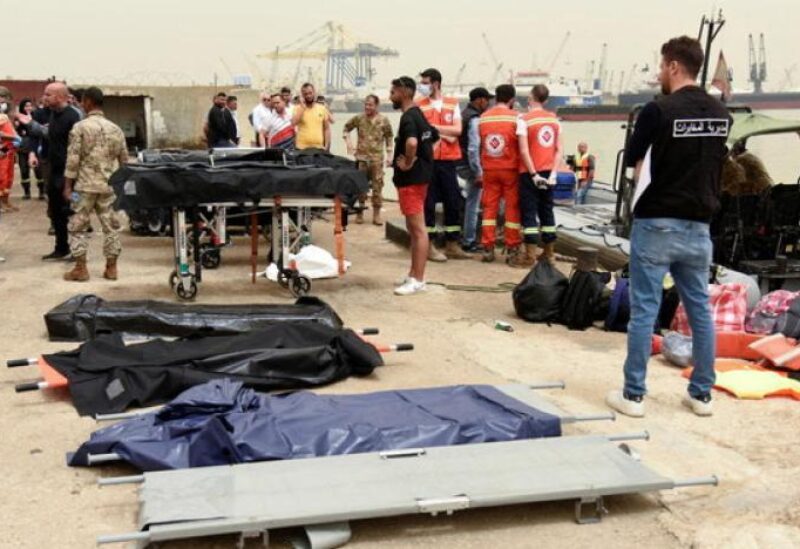 People stand near stretchers that are prepared for dead bodies after a boat capsized off the Lebanese coast of Tripoli overnight, at port of Tripoli, northern Lebanon April 24, 2022. (Reuters)

A submarine has found the remains of at least 10 migrants who drowned when their boat sank earlier this year off the coast of Lebanon with about 30 people on board, the navy announced.

The boat, carrying dozens of Lebanese, Syrians and Palestinians trying to migrate by sea to Italy, went down more than 5 kilometers from the port of Tripoli, following a confrontation with the Lebanese navy.

Ten bodies were recovered that night, including one of a child, while 48 survivors were pulled from the Mediterranean Sea. According to navy estimates, 30 people were believed to have gone down with the boat.

Since Monday, the small, 3-person underwater craft — a Pisces VI submarine — has been searching for the remains. The wreck was located on Wednesday, at a depth of some 450 meters (about 1,470 feet).

The circumstances of the vessel’s sinking are disputed to this day. Survivors say their vessel was rammed by the Lebanese navy, while the military claims the migrants’ boat collided with a navy vessel while trying to get away.

Capt. Scott Waters, who operated the craft, told reporters at a press conference in Tripoli Friday that the first body they found was outside the wreck but much of it had decayed since the sinking, with mostly bits of clothing and some bones remaining intact. He said the second body was found coming up from the wreckage.

Waters said the crew identified four more bodies inside the wreckage and a substantial amount of debris around the vessel. At least four other bodies were found away from the wreck.

Some of the people who tried to escape the boat, he assumed, got “tangled in that debris.”

“One of the very last footage and images we took,” he added, was of the remains of a person, an arm around another. “They died holding each other.”

Tom Zreika, a Lebanese-Australian and the chairman of Australian charity AusRelief that helped bring the submarine to Lebanon, said the boat was a “fair degree under silt,” making it difficult to retrieve it.

Zreika said what’s next is for Lebanon to bring the sunken boat out but that remains a difficult task.

Lebanon’s navy chief, Col. Haitham Dinnawi, said all the video footage from Waters’ crew will be handed over to the judiciary as it investigates the sinking.

Tripoli lawmaker Ashraf Rifi helped lease the submarine for cash-strapped Lebanon through Zreika and his own brother, Jamal Rifi, who lives in Sydney. Rifi and Zreika told The Sydney Morning Herald last month that an anonymous donor had given just over $295,000 to lease the submarine.

The April sinking was the greatest migrant tragedy for Lebanon in recent years and put the government further on the defensive at a time when the country is in economic free fall and public trust in the state and its institutions is rapidly crumbling.

With a population of about 6 million people, including 1 million Syrian refugees, Lebanon has been mired since 2019 in an economic meltdown that has plunged three quarters of the population into poverty.

Once a country that received refugees, Lebanon has become a launching pad for dangerous migration by sea to Europe. As the crisis deepened, more Lebanese, as well as Syrian and Palestinian refugees have set off to sea, with security agencies reporting foiled migration attempts almost weekly.