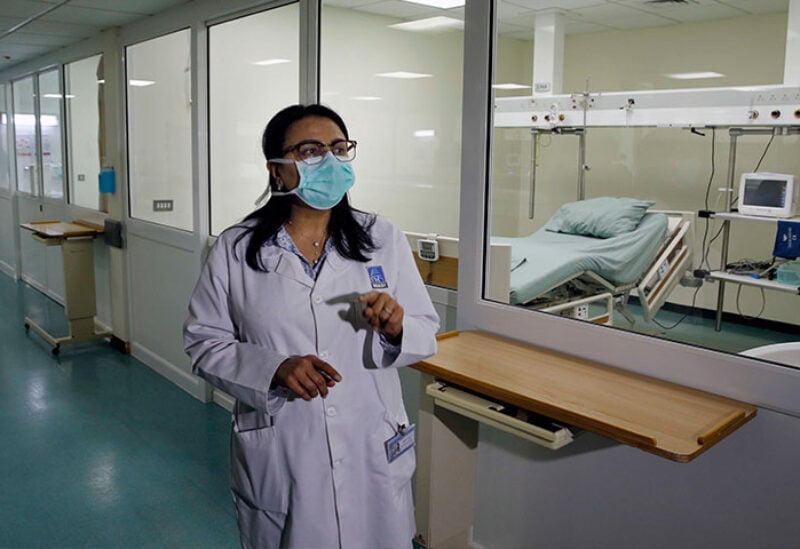 The pediatric service of Beirut Governmental Hospital Quarantine, destroyed by the 4th August explosion in Beirut, was reconstructed by Switzerland. On Wednesday 28th April 2021, the pediatric service was handed over to the Minister of Public Health, Dr. Hamad Hasan, by HE Monika Schmutz Kirgöz, Ambassador of Switzerland in Lebanon, in the presence of representatives of the hospital administration, the Ministry of Public Health, Deputy Special Coordinator of the United Nations in Lebanon, Najat Rushdi, the Embassy of Switzerland, and the media.

In her address, Rushdi highlighted the fact that the Governmental Hospital Quarantine treated approximately a thousand children annually from the most vulnerable social and economic stratum, including Lebanese nationals, refugees of various nationalities, and internally displaced persons.

“Today, at a time when Lebanon endures the worst economic and financial crisis in its history, a light could be seen bringing about hope for the resurgence of Beirut, the reconstruction of a better Lebanon,  and the restoration of the capabilities of its medical institutions,” Rushdi said.

She saluted the families of the blast victims, as well as the nursing body’s continuous efforts to treat patients.

Moreover, Rushdi saluted Switzerland for its continuous support to Lebanon and the Lebanese people, and for its immediate response providing emergency assistance in the wake of Beirut Port explosion by ensuring temporary treatment equipment in hospitals, and also by rehabilitating several damaged public schools.

In her delivered word, the Swiss Ambassador to Lebanon said, “When the tragedy struck in the heart of the Lebanese capital on August 4, Switzerland made sure to remain faithful to its humanitarian traditions and to the long history of its friendship with Lebanon, so it intervened quickly.”

“Today, eight months after the explosion, I am pleased to hand over a new department of pediatrics to His Excellency the Minister of Health,” she added, while commending “the speed and quality of this achievement, which is a joint fruit of efforts of a number of individuals and institutions, many of whom stand among us today.”

Kirgöz went on to applaud the Ministry of Public Health’s swift response to Switzerland’s offer of assistance.

“The United Nations played a central role in coordinating international solidarity by ensuring a coherent and fair distribution of aid,” she added, saluting as well the hospital staff for its resilience.

“Switzerland has been involved for several years in Lebanon in order to protect and strengthen the independence of vulnerable people, who are victims of conflict, and to ensure that children receive quality services in the field of education, protection, and water, which are among our priorities. Therefore, children were at the heart of the response that Switzerland provided after the explosion. Beyond that, we have rehabilitated approximately 19 public schools that were inaugurated last March,” Kirgöz concluded.

In turn, the Health Minister said, “Lebanon’s horizon would have been blocked had it not been for the support of our international and UN partners; they have all demonstrated an advanced humanitarian sense and a high level of responsibility and responsiveness to stand by their fellow humans.”

“To those children who are suffering, especially in these difficult times that Lebanon is going through, we say, with your efforts, Lebanon can once again become the Switzerland of the Middle East,” Hassan added.

He went on to recall Lebanon’s pioneering efforts receiving, reviving, and supporting all of those who sought refuge on its land. “Unfortunately, we have become in dire need of someone who supports us and stands by our side.”

Hassan finally stressed the need to rebuild and restore all what had been destroyed in Beirut.

Winding up the handover ceremony, the hospital administration presented a shield of honor to the Swiss Ambassador as a token of appreciation of all her efforts.

The Beirut’s port explosion on August 4th 2020 took a heavy toll on human lives and caused massive destruction in the surrounding of the port. Public facilities were destroyed. Among these was the Governmental Hospital Quarantine, a reference public hospital for pediatrics in Lebanon, annually treating about a thousand children and babies from a socially and economically vulnerable population, including refugees. Its capacity to provide healthcare came to a halt.

As part of its response to the blast, Switzerland has reconstructed a full-fledged pediatric service at Beirut Governmental Hospital Quarantine. This self-implemented project, whereby the Embassy of Switzerland directly tendered the works to a local architect and construction firm, allowed for a rapid and effective reconstruction. The rebuilt pediatric service provides the same number of beds as before the explosion, and a high-quality environment for specialized pediatric healthcare. A new operation theatre reserved for pediatric chirurgical interventions was added.