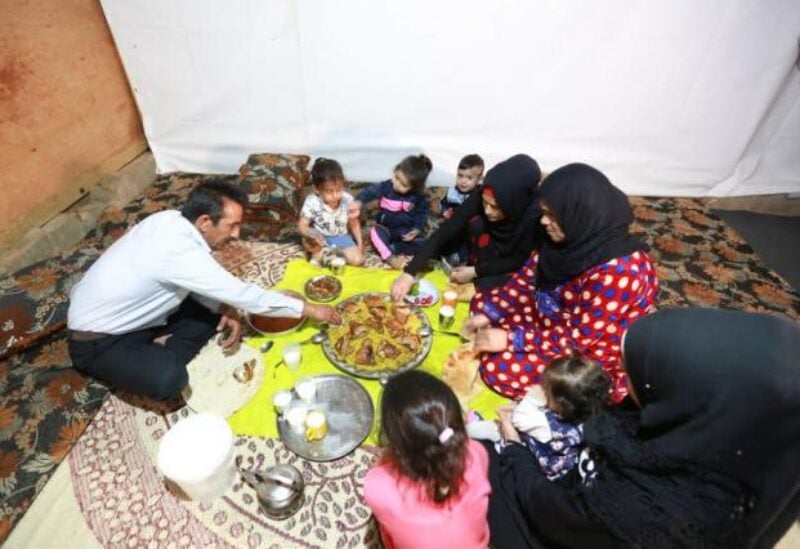 Hussein al-Khaled and his family have lived in a makeshift hut in Lebanon for a decade since escaping the war in neighboring Syria, but this year the COVID-19 pandemic and a severe financial meltdown in Lebanon are making it even harder to spend Ramadan away from home.

50-year-old Khaled, his wife and their 11 children share a 2-room hut made of tarpaulin and wood in an informal refugee camp in a field in the Bekaa Valley town of Bar Elias, and are currently reliant on aid donations because joblessness is now rampant and there is no work to be found.

“Our spirits are down this year. Ramadan is here and we don’t know what to do for the kids,” said Khaled who has not had a job for the past 6 months.

His wife, who is identified as Um Ahmad which means mother of Ahmad, said the family could no longer afford enough cooking oil to fry potatoes for dinner when they break their daily Ramadan fast at sundown.

Gone are the days of Ramadan feasts and new clothes for the children, when the family lived comfortably at home in Aleppo and Khaled had regular work in construction, laying tiles. The war devastated their house and ended that life.

“I never would have expected this. My children’s future is gone,” Khaled said. “They ask me about many things. ‘Baba why don’t you get me this?’ How can I buy things for them?”

The family are among up to 1.5 million Syrian refugees who have flocked to Lebanon since 2011 and are estimated to make up nearly a quarter of the country’s population. Most have languished in severe poverty in tented settlements.

So many refugees like Khaled used to be able to work to eke out a living, but daily wages have been slashed as the coronavirus pandemic has forced Lebanon into repeated lockdowns.

Compounding the problem, Lebanon’s unprecedented economic collapse, which has pushed most Lebanese into poverty since 2019, has sent the price of staple foods soaring.

“Everything is 10 times more expensive – rice, bread, a can of Pepsi,” said Khaled. “Things are very tough, on us and on the people of this country.”

Still, in spite of all the agony, Khaled says the family remains wary of returning to Syria for now because of security concerns. Um Ahmad says it is painful to think of life at home before the war.

“Today, we’ve been displaced for 10 years,” she said. “From living in our home to sitting in a tent, it’s the difference between the sky and the earth.”