The system exports drugs and missiles to Arabs … and asks for their support! 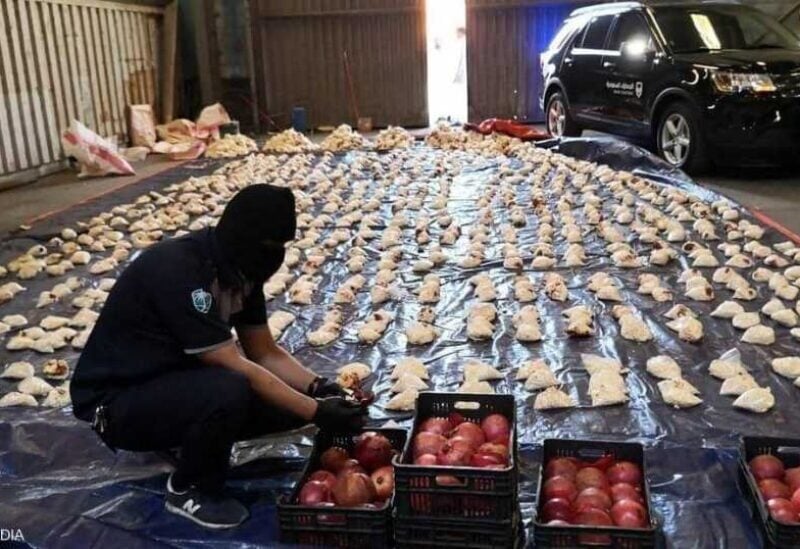 While the people of the system were striving to break Lebanon’s isolation – or their isolation – in the Arab world in general and the Gulf in particular, as the covenant took more than one step in the past weeks to show its goodwill towards the Saudis … The kingdom is heading towards more estrangement with Beirut, according to what opposing political sources tokld AL Markaziya

Yesterday, Saudi Arabia announced that it would prevent Lebanese fruits and vegetables from entering its territory due to the concealment of drugs inside a shipment of pomegranate fruits coming from Lebanon, which had been seized. It explained in a statement that “based on the Kingdom’s obligations in accordance with the internal regulations and provisions of international conventions in the matter of combating drug smuggling in all its forms, and where the concerned authorities in the Kingdom have noticed an increase in their targeting by drug smugglers originating from the Lebanese Republic or passing through Lebanese territory. Lebanese products are used to smuggle drugs into the Kingdom’s territory, either through the incoming dispatches to the Kingdom’s markets or with the intent to cross over to the countries neighboring the Kingdom, and the most prominent of those consignments that are used to smuggle vegetables and fruits. And given that no practical measures have been taken to stop these practices towards the Kingdom, despite numerous attempts to urge the concerned Lebanese authorities to do so, and in order to protect the Kingdom’s citizens and residents on its territory from anything that affects their safety and security; It has been decided to prevent the entry of Lebanese vegetable and fruit consignments into the Kingdom or transit through its lands, as of next Sunday morning.

This situation does not affect negatively  the Lebanese agricultural sector which will suffer great losses only, but all the Lebanese as well, who are eagerly looking forward to the return of their country’s relations with its Arab surroundings, to its previous era, especially since the Arab and Gulf countries form the backbone of Lebanon’s economy, investments and tourism. They are in dire need of this “bond” after their backs were broken by the corruption and selfishness of the ruling class.

In any case, the Saudi statement clearly condemned the performance of the Lebanese Authority and its shortcomings in security and trade. Unfortunately, the export of drugs to the Kingdom follows the export of Lebanon to the borders of the southern kingdom, and to Yemen in particular, weapons, militants and long-range missiles, with experts from Hezbollah to train the Houthis – their partners in the resistance axis – in order to target Riyadh. The cells of the party and its members are also present in Bahrain and Kuwait, and before that they were present in Egypt, where they urged their allies to revolt against the ruling regimes. As for the leaders of Hezbollah, they continue to target politically  the kingdom and the Gulf officials, accusing them of betrayal and labor … Amidst the resounding and prolonged official silence, over all these dangerous “breaches”, the sources add, the people of the system did not hesitate, and with cool nerves, to knock on the doors of Abu Dhabi at times and Doha developed, asking them for financial and medical support!  asking for financial and medical support! But this support, of course, will not come. Lebanon will once again pay the price for the system’s failure, and its people are victims of the mafia and militia coalition that rules it … Probably, and according to previous experiences, the authority will not learn from the new Saudi measure and will not understand that the establishment of a real, real state that respects itself and the sovereignty of other countries, a state that does not return favors to its aides with drugs and missiles, has become an urgent matter. Or else Lebanon will die alone sinking in its crisis with no helping hand. According to AL-Markaziya