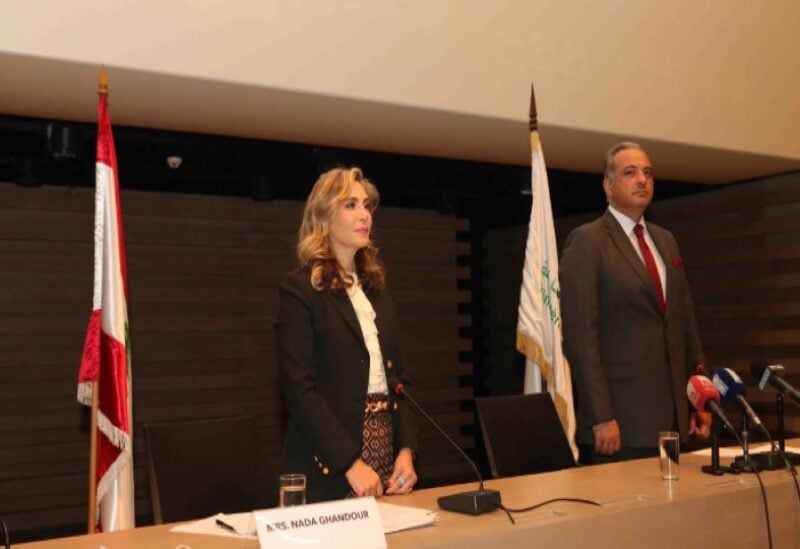 The conference took place in the presence of Minister of Culture judge Mohammad Wissam el-Mortada, who stated: “’Art is a step from what is obvious and well-known, toward what is arcane and concealed,’ – Gibran Khalil Gibran. Art resides in this immense and marvelous ‘unknown,’ where words fly into thin air. Today, the Lebanese Pavilion in Venice unfolds. The ‘current’ Lebanon is a broken one; thus, the dire necessity to step out of the crisis has entailed the establishment of an opulent artistic scene to express and reflect its traumas and accomplishments, while the presence of Lebanon in Venice responds to this call.”

Placed under the auspices of the Ministry of Culture and organized by the Lebanese Visual Art Association (LVAA), the Lebanese Pavilion at the Biennale Arte 2022 will present the works of filmmaker and video maker Danielle Arbid – from the diaspora and based in Paris – and visual artist Ayman Baalbaki – who lives and works in Beirut – with scenography conceived by Aline Asmar d’Amman, architect and founder of Culture in Architecture.

During her speech, Nada Ghandour said: “This artistic project, influenced by the Lebanese context and which echoes global issues, invites us on a symbolic journey into the contemporary world through a theme, a city and two artists. The economic, social and political crisis that Lebanon has been facing since the end of 2019 is unprecedented. Its echoes will resound through the Arsenal thanks to the work of the two chosen artists, who maintained a political and aesthetic dialogue. This exhibition in Venice offers everyone a space for symbolic exchange around the history of Lebanon and today’s society.”

Ghandour added: “The ambition of this project is to allow Lebanon’s artistic scene to shine on the international map of contemporary art and to send a strong message of commitment and encouragement to the artists of this country currently going through the most difficult times in its history. The artistic sector of Lebanon has hence become important to ensure its continuity especially with the economic benefits that this entails.”

The World in the Image of Man

The Lebanese Pavilion at the 59th Venice Biennale illustrates the perpetual action of the human imagination on the reality of the world. In the exhibition The World in the Image of Man, fiction inspires and nourishes our daily lives. Its project invites us on a symbolic journey into the contemporary world through a theme, a city, and two artists, Danielle Arbid and Ayman Baalbaki, who maintain a political and aesthetic dialogue from a distance, by presenting artworks that are so far and yet so close.

Beirut, a cosmopolitan city, is the place where this borderless theme is embodied: all individuals of all cultures can interpret and appropriate it through their own perception.

Only art can make sense of the codes of our vision, transcribe them and have them echo in one form or another. Ayman Baalbaki’s monumental installation and Danielle Arbid’s video evolve between a mental image that has become reality due to Baalbaki’s plastic gesture, and a tangible reality that has become pure vision in the eye of Arbid.

The dialogue maintained with Beirut by the two artists reveals the increasingly heightened competition between the real and the virtual – a paradigm shift that has impacted our environment and our most diverse activities and that has created a place now common to all humanity.

Lebanon did not wait for the theorization of globalization to identify and experience its challenges: trade, consumption, financial woes, wars, mobility, among other difficulties. Lebanon has been crossed by both tradition and modernity and, since Antiquity, has been a major territorial challenge. As a pivotal point between the East and the West, it has repeatedly and reluctantly suffered from being the receptacle of a panoply of tensions coming from elsewhere and each time profoundly transforming the most accomplished work of man: the city.

More than ever, the political, economic and social unrest that Lebanon has been grappling with since 2019 is bringing Beirut, a martyred city and a potential city of the future, back before the eyes of the world.

Danielle Arbid and Ayman Baalbaki have chosen, as their artistic reflection and creation, the subject of the polysemic urban character of Beirut, at the heart of the upheavals of the global crisis and the emotional instability of a technologized relation to the world.

Danielle Arbid will be presenting a video titled Allô Chérie and Ayman Baalbaki an installation titled Janus Gate.  The political dimension of these two works is more than ever justified in light of the current situation in Lebanon. They both portray the contradictions and difficulties plaguing the country through their symptoms. The frantic race for money is inseparable from the violence raging in Lebanon today. Real estate speculation, which promises dreams, hides ruin and misleads as far as merchandise concerned. Anxiety over the economic and political implosion of Lebanon is becoming more and more tangible. With their own means, and walking on the rope of the eternal return, both bring to life the flesh of Lebanon in its chaos and beauty.

Danielle Arbid states: “The video that will be projected rejoins through its shots Ayman’s work, is part of My Lebanese Family series. In this creation, my character –my mother- is a mirror image of Lebanon: It embodies it with its fatalistic mentality, its appetite for risk taking, and its exuberance. She is caught in a frantic pursuit for money, in a car through Beirut. Its struggle is inseparable from the violence that prevails today in Lebanon, as was the case in other countries, in Europe and elsewhere.”

Speaking about his work, Ayman Baalbaki says: “My starting point was Beirut, which I see as a city rich in what Michel Foucault refers to as ‘other spaces.’ Along the model of the word ‘Lebanonization,’ meant to describe the fragmentation of a state, ‘Beirutization’ defines places troubled by barricades and borders – in other words, to speak of the urban dismemberment of a city and its fragmentation into discrete islands. I then thought of Janus, the two-faced Roman god who looks both to the inside and to the outside, to the past and to the future. I built a 3D structure in which two spaces coexist: a radiant exterior space and an interior one similar to all the slums in the world.”

The exhibition “The World in the Image of Man” is taking place in one of the halls of the Venetian Arsenal, a classified historical monument.

The Pavilion’s scenography answers to the curatorial notion of dialogue, a central idea within this project.

Echoing the works by Danielle Arbid and Ayman Baalbaki, architect Aline Asmar d’Amman suggests a wander through the heart of Lebanon which: “takes the form of a brutalist elliptical shell evoking the eternal wish for rebirth and unity. The surrounding geometric form invites the works to engage in a dialogue of truths, facing each other, shortening the distances, as if engaged in an innate and natural conversation.”

This scenographic setting of approximately 150 m2, derived from the brutalist architecture that flourished in Lebanon as of the 1960s, echoes a walk through Beirut, through the eyes of Ayman Baalbaki and Danielle Arbid. The facade is covered with curved panels coated in a concrete texture, evoking the city, under permanent construction. The oculus of the Pavilion opens onto the magnificent framework of the Venetian roof, as an invitation to draw the gaze upwards.

Upon entering the Lebanese Pavilion, the visitor is first confronted with the work of Ayman Baalbaki, and then they are drawn to Danielle Arbid’s video projected directly on to the wall.

For Aline Asmar d’Amman: “the choice of such radical actions and scenographic materials expresses a desire for sobriety in response to the country’s current situation.”