Transparency International: To avoid total collapse, government must be formed of politicians with integrity 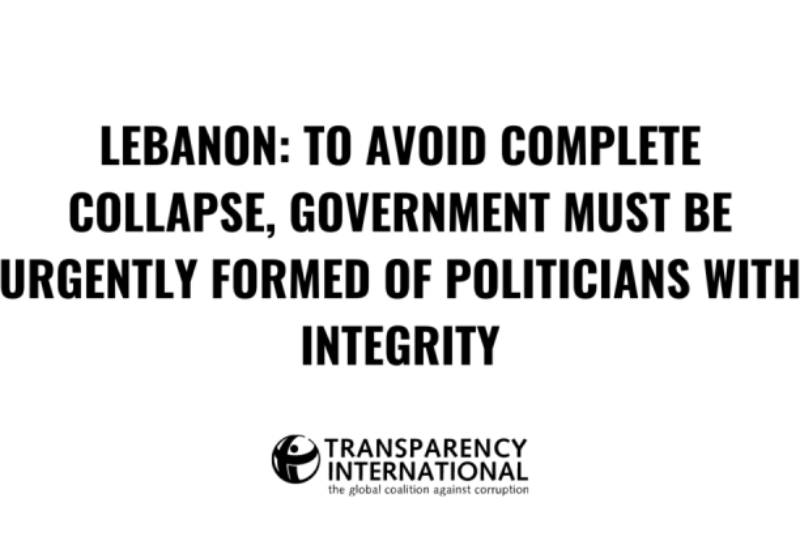 To avoid complete collapse of the state and to protect the population, Lebanese decision-makers must immediately form a government founded on integrity, good governance and the common good.

The political instability and economic recession – deepened by the COVID-19 pandemic and last year’s Beirut port explosion – have sunk Lebanon into a deep crisis. Seventy-four per cent of Lebanon’s population is in poverty while food prices soar, a catastrophe in terms of access to water is imminent and the health system is collapsing.

Decision-makers’ evident inability to set aside differences and their failure to establish a government constitutes a breach of their constitutional duties. Transparency International and its national chapter, the Lebanese Transparency Association – No Corruption, condemn this unwillingness by these politicians and call on them to urgently form a government.

“The people of Lebanon deserve a government made up of politicians with integrity as well as extensive experience in public sector and disaster management,” said Delia Ferreira Rubio, Chair of Transparency International. “Furthermore, they must be untouched by any suspicion of corruption, and there must not be any conflict between their private interests and the public interest.”

The Chair of the Lebanese Transparency Association, Dr. Mosbah Majzoub, emphasised that: “The justice required for the families of the victims of the Beirut port explosion cannot be achieved without establishing rule of law, good governance and transparency. They deserve an independent investigation and a fair trial to be held that demonstrates responsibilities and applies the legally defined penalties against the perpetrators.”

Once in place, the new government must launch an economic and social recovery plan with national actors and international donors. This will only succeed, however, if they uphold rule of law and good governance by prioritising the following actions:

Even before the ongoing crises, systemic corruption was rife in Lebanon. With a low score of 25, Lebanon is a significant decliner on the 2020 Corruption Perceptions Index (CPI), having dropped five points since 2012.