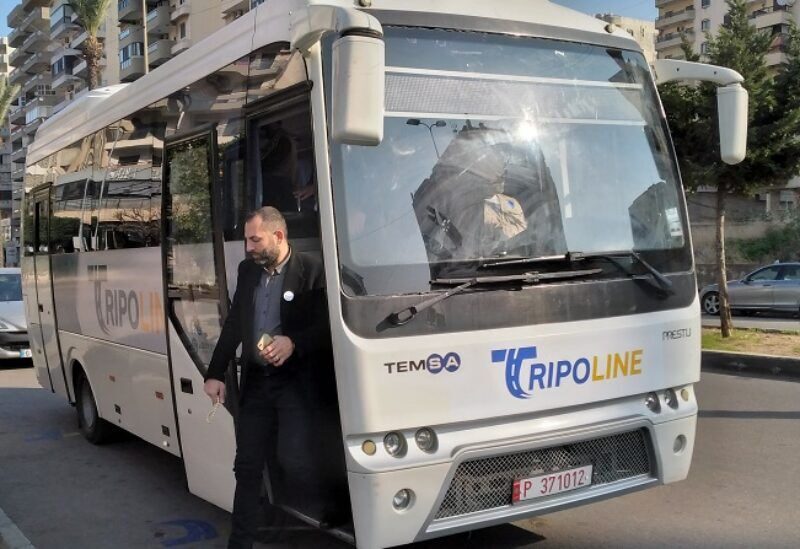 A group of businessmen and workers from different sectors launched the first joint transport project within the city of Tripoli and its surroundings under the name “Tripoline”, which aims to connect the city with its neighbors, at a “non-profit” cost, according to the initiative’s organizers.

On Sunday morning, it was announced the launch of the first transport line within the initiative, which links Tripoli and Koura through a number of stations between the two regions. A meeting was held for a number of journalists, in the presence of the organizers of the initiative, who gave a detailed explanation about it.

The initiative’s spokesperson, businessman Wael Zamerli, announced the official launch of the Tripoline initiative today, pointing out that it is an “initiative to secure dual transportation between Tripoli and its surroundings at a non-profit and appropriate cost in these circumstances.”

Zamerli pointed out that “this initiative was undertaken by a group of businessmen who met and decided to serve the people without any political goals or objectives.”

He stressed that “this non-profit initiative aims to secure joint transportation worthy of the people of Tripoli to move in a dignified manner and at reasonable prices in light of the successive economic and social crises that the city and Lebanon suffer from, which is reflected in a rise in fuel prices and taxi prices.”

Zamerli highlighted the importance of joint transport and its role in reducing congestion and pollution, maintaining rules, punctuality and maintaining a minimum level of continuity of the economic cycle in the country.

He added: “We, as a group of businessmen, have taken it upon ourselves to support this initiative, and therefore we have set an appropriate price as well, which is only 7,000 LBP, which includes any station that passengers wish to disembark at.”

He revealed that there are other lines that will be launched successively in the near future, in addition to the Tripoli-Koura line, because the goal is to link the city and its suburbs.

Then a journey took place on the line from Tripoli to the last point to ascend at Koura Hospital after the Aba – Koura junction and back to Al-Nour Square in Tripoli, passing through all the points at which the bus would stop for passengers to get off or on.

During the trip, the most prominent features of the bus were explained including the services it provides, the stations it will stop at, and the mechanism for communicating with the bus administrator to know the time passengers will arrive.

The issue of safety on trips was also emphasized by the presence of an official on the bus beside the driver, who is ready to receive complaints from passengers and resolve any emergency issues during the trip.

It is noteworthy that the first official trips for this initiative will start tomorrow morning, Monday, from Al-Nour Square in Tripoli.