UK’s COP26 Regional Ambassador ends visit to Lebanon: Building back greener must be at the heart of any long-term sustainable plan for Lebanon 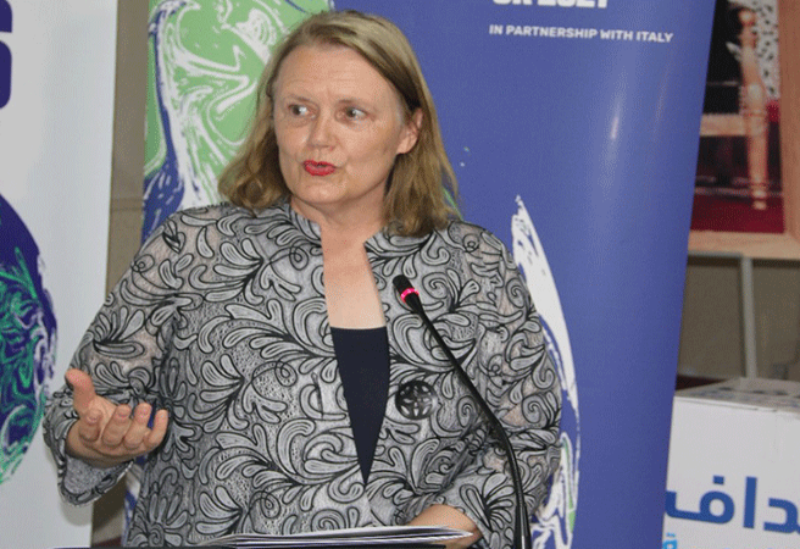 The UK’s COP26 Regional Ambassador for the Middle East and Africa, Janet Rogan, ended a two day visit to Lebanon this week. This is her first official visit to the MENA region since the 26th UN Climate Change Conference concluded in Glasgow earlier this month.

During her visit, Ambassador Rogan met with Ministers of the Environment, Energy and Finance. She participated in a COP26 roundtable discussion in partnership with UNDP and the Minister of the Environment, which was attended by more than 50 climate innovators, environmental experts, young people, Chevening graduates, NGOs and more.

In her meetings, Ambassador Rogan welcomed the participation of Lebanon’s delegation, headed by PM Mikati, in COP26. In particular, she welcomed Lebanon’s commitment to the Glasgow Forest & Land Use Initiative and the country’s commitment to protect at least 20% of marine ecosystems. She also discussed Lebanon’s revised and ambitious Nationally Determined Contribution (NDCs), which were made ahead of COP26 (this included a 20% unconditional GHG reduction, up from 15%).

Ambassador Rogan’s visit to Lebanon enabled her to see first-hand some of the areas in Lebanon most at-risk from climate change, including UNDP forestation project in Shouf funded by UKAid. This visit enabled her to discuss the specific actions needed to confront these challenges, and to hear from local communities how they are adapting.

‘I am delighted to be in Lebanon, right after the global climate conference – COP26 – hosted by the UK in Glasgow. COP26 is the COP of action, agreed by all countries participating through the Glasgow Climate Pact. This visit was a chance to thank the Lebanese government for the ambitious commitments made at COP26 and to encourage action to implement these commitments.

The MENA region is one of the most climate-vulnerable regions of the world, with impacts ranging from water-stress to rising temperatures and increasing extreme weather events, including wild fires. The impact of these changes is being felt in every part of the daily life and livelihoods of people in Lebanon. This short visit was an opportunity to see for myself the impact of this climate vulnerability in Lebanon, and to hear how the public and the private sectors can respond to these real needs, following up on COP26.

The British Government acknowledges the significant challenges Lebanon faces, including the economic crisis and rebuilding after the 2020 Beirut Port explosion. The country needs urgent reforms, and building back greener must be at the heart of any long-term sustainable plan for Lebanon.’

‘I welcome COP 26 MENA Ambassador Janet Rogan’s visit to Lebanon, her first visit to the region after the successful COP26 summit in the UK this month. Lebanon is in the grip of one of the worst crises in modern history. Only through real political and economic change can Lebanon unleash its potential,and achieve the better future Lebanon’s people deserve, including by embracing greener policies and commitments.

The COVID-19 pandemic has brought devastation to millions around the world, disrupting many parts of the global economy and setting back development programmes by years. Governments, including the UK, have stepped up to protect lives and livelihoods. But the climate has continued to warm, provoking serious changes that are disrupting lives, livelihoods and nature. As countries begin to recover from the Coronavirus pandemic, we must take the historic opportunity to tackle climate change at the same time – to build back better, and greener.

I was delighted to co-host a post-COP26 event in partnership with UNDP and the Ministry of Environment, with more than 50 climate innovators, environmental experts, young people, Chevening graduates, NGOs and more, at which both the Minister of Environment and Ambassador Rogan discussed the need for the full participation of youth in climate action.

Lebanon also has the opportunity to tap into funding opportunities launched by European Bank for Reconstruction and Development (EBRD) for the High Impact Partnership for Climate Action (HIPCA) trust fund, with the UK contributing £50 million in finance.