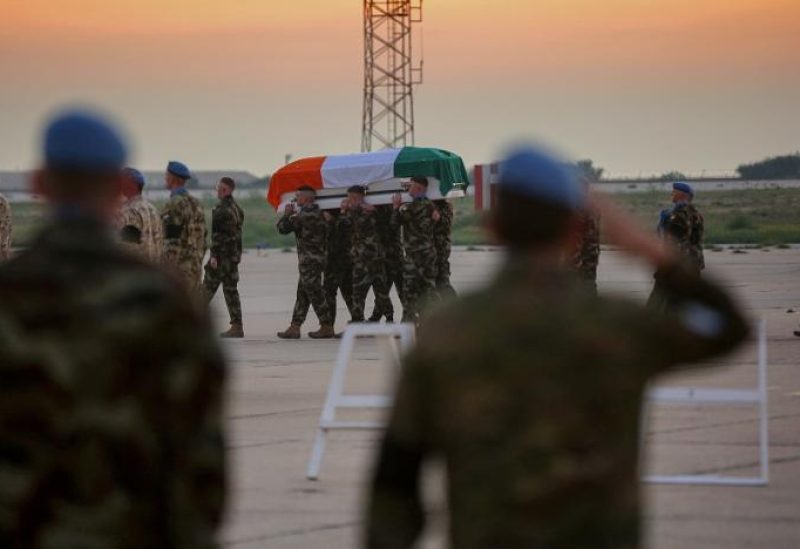 18 December 2022, Lebanon, Beirut: The coffin of Irish peacekeeper serving with the United Nations Interim Force in Lebanon (UNIFIL) Sean Rooney, who was dead earlier this week in South Lebanon, is carried by his colleagues during a repatriation ceremony at Beirut airport before being taken by an Irish military plane back home. (dpa)

The Lebanese army and UN peacekeepers held a memorial at the Beirut airport on Sunday for an Irish soldier killed by a mob that opened fire last week at two vehicles belonging to the UN peacekeepers in southern Lebanon.

The attack that killed 24-year-old Pvt. Seán Rooney of Newtowncunningham took place near the southern town of Al-Aqbiya on Wednesday night, as he and seven other Irish peacekeepers from United Nations Interim Forces in Lebanon (UNIFIL) were on their way to the Beirut airport.

A person familiar with the investigation said local residents were angered and became aggressive when two UNIFIL armored vehicles took a detour through Al-Aqbiya, which the residents said is not part of the area under UNIFIL’s mandate.

The Iran-backed Hezbollah party, which has bases and traditional strongholds in southern Lebanon, has not commented on the attack.

One of the unidentified attackers shot Rooney in the head, a security official said. Three other Irish peacekeepers in another UNIFIL vehicle were injured when their car crashed into the aluminum shutters of a building and rolled over as it tried to flee the scene.

At the airport memorial, UN peacekeepers stood by Rooney’s coffin after it arrived from a hospital the southern city of Sidon. His body was then transferred to a military carrier to be taken back to Ireland.

“We shall always keep in mind our fallen comrades in arms, as they represent an example of an unwavering commitment to UNIFIL and this country,” the UNIFIL chief, Maj. Gen. Aroldo Lázaro, said at the memorial.

The Lebanese authorities have not yet commented on the ongoing investigation, though the security official added that seven bullets were retrieved from the vehicle.

The Irish military declined to comment on the incident to the AP.

Confrontations between residents in southern Lebanon and UNIFIL troops are not uncommon. In January, unknown perpetrators attacked Irish peacekeepers in the southern town of Bint Jbeil, vandalizing their vehicles and stealing items. The residents accused them of taking photographs of residential homes, though the UN mission denied this.

UNIFIL was created to oversee the withdrawal of Israeli troops from southern Lebanon after a 1978 invasion. The UN expanded its mission following the 2006 war between Israel and Hezbollah, allowing peacekeepers to deploy along the Lebanon-Israel border to help the Lebanese military extend its authority into the country’s south for the first time in decades.

That resolution also called for a full cessation of Israeli-Hezbollah hostilities, which has not happened.