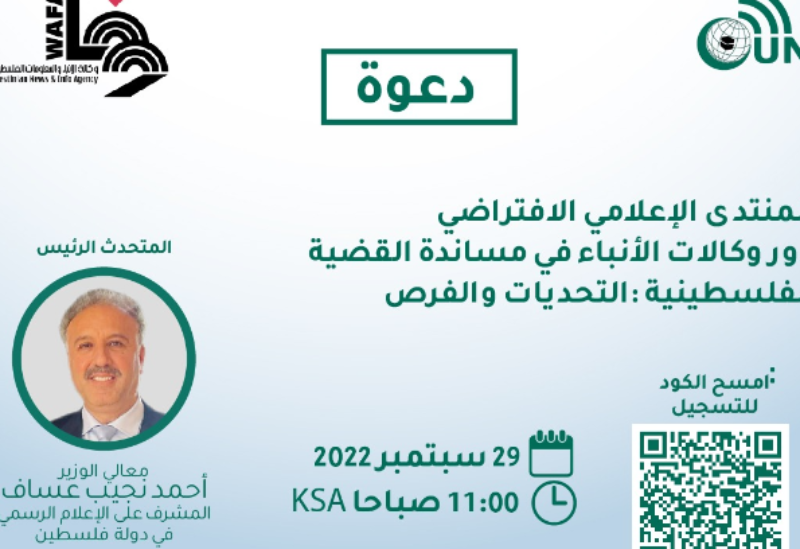 The Union of OIC News Agencies (UNA) will hold a virtual media forum on “The Role of News Agencies in Supporting the Palestinian Cause: Challenges and Opportunities” on Thursday, September 29, 2022.

During the forum, the General Supervisor of the official media in the State of Palestine, His Excellency Minister Ahmed Assaf, will outline the Palestinian vision and aspirations regarding the role of media in supporting Palestine and emphasizing its rights.

“The forum is based on the resolutions of the UNA General Assembly and Islamic Conferences of Information Ministers, which called upon member states to continue to sensitize public opinion to the Palestinian cause by providing maximum media coverage for all aspects of life in the occupied Palestinian territory,” said UNA Acting Director General Mohammed Abd Rabbo Al-Yami.

Al-Yami indicated that the forum will examine the challenges and opportunities in the activities of member news agencies to advocate for the Palestinian cause and strengthen Palestine’s media position.

He added that the forum also seeks to identify the aspirations of the State of Palestine regarding media and its needs in this aspect, come up with a preliminary vision for joint media work in advocating the Palestinian cause, and enhance communication between Palestinian media institutions and their counterparts in OIC countries.