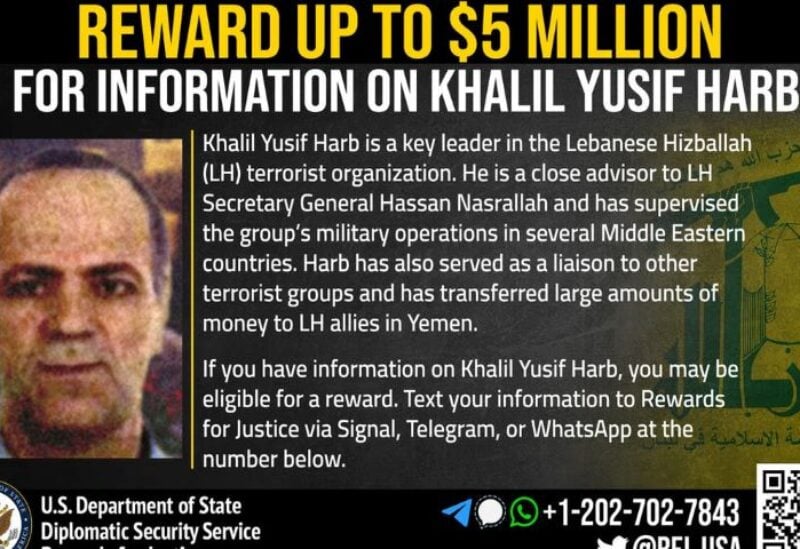 US Department of State offers reward for information about Yusuf Harb

The US State Department is offering a financial reward of $5 million to anyone who provides information on a Lebanese man affiliated with the Iran-backed Hezbollah group who contributed to smuggling large sums of money to the Iran-backed Houthis in Yemen.

“Khalil Yusuf Harb is a close adviser to Secretary General Hassan Nasrallah, leader of the Lebanese Hezbollah terrorist group, and has served as the group’s chief military liaison to Iranian and Palestinian terrorist organizations,” the US State Department announced on Sunday via its “Rewards for Justice” program.

“Harb has commanded and supervised the organization’s military operations in the Palestinian territories and several countries throughout the Middle East. Since 2012, Harb has been involved in the movement of large amounts of currency to Hezbollah’s political allies in Yemen. In August 2013, the U.S. Department of the Treasury designated Harb as a Specially Designated Global Terrorist pursuant to Executive Order 13224,” the US Department added.

Last June, the US Treasury imposed sanctions on members of a smuggling network linked to Iran that collects millions in favor of the Houthi militia, and this support, according to Washington, helps the Houthis carry out attacks that threaten civilian infrastructure in Yemen and Saudi Arabia.

REWARD! Up to $5 Million for Information

If you have information on Harb, text it to RFJ. You could be eligible for a reward.https://t.co/iC1uXka4VE pic.twitter.com/McVuFl1gIz