US worried about potential collapse in Lebanon, Hezbollah’s missile technology 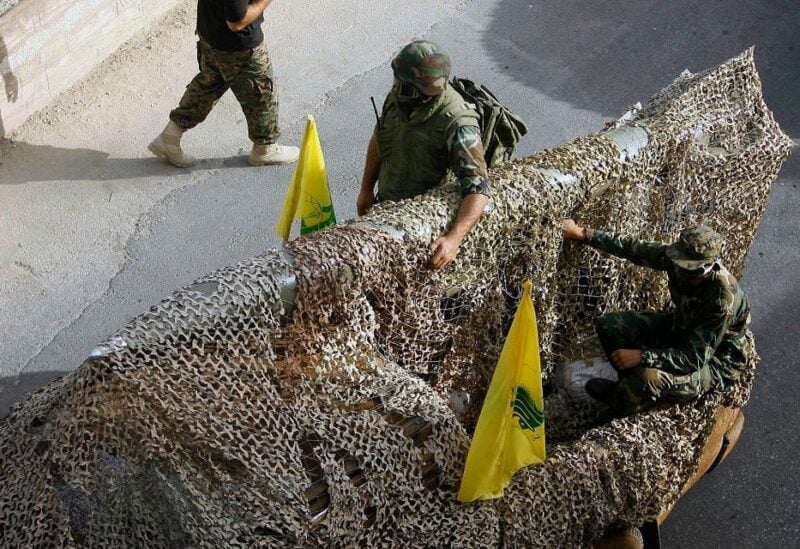 Hezbollah fighters stand atop a car mounted with a mock rocket, as they parade during a rally to mark the seventh day of Ashoura, in the southern village of Seksakiyeh, Lebanon. (File Photo: AP)

The US will share its mutual concern with Israel over Iran-backed Hezbollah’s precision-guided missile technology, a senior Biden administration official said Tuesday.

“There is a discussion to be had in terms of our mutual concerns, security concerns, about what’s going on in Lebanon. Of course, the Israelis are quite concerned in terms of the precision-guided missile technology transfer piece to Hezbollah, and we’re quite concerned about that,” the US official told Al Arabiya English during a phone briefing with reporters.

But the US will also discuss the “real potential for state collapse if the Lebanese political elites do not get their act together and form a new government,” the US official said.

Lebanon has been without a fully functioning government for over a year since Hassan Diab’s government resigned following last year’s blast at the Port of Beirut.

Poverty has reached unprecedented levels, shortages of medicines and fuel have sparked violence, and the local currency has plummeted by 90 percent.

The international community has offered to provide badly needed financial aid, but it has demanded a new government and reforms to combat corruption and the waste of public funds.

Potential offshore fields of natural gas are one way Lebanon has hoped to begin climbing out of its economic and financial crisis.

Some of the largest potential reserves lie in disputed waters along Lebanon’s southern maritime border with Israel.

The US has tried to mediate a solution for decades. A breakthrough in the yearslong dispute appeared in the works after the Trump administration facilitated the first talks between the sides at the UN headquarters in southern Lebanon last year.

Indirect talks have since stalled, and Hezbollah has blamed the US.

But the US is ready to resume its diplomatic efforts. “I would just say that, I mean, we’ll be ready to brief the [Israeli] prime minister and his team on sort of our approach on that maritime issue,” the US official said.

A second US official, also on the call, said the crisis in Lebanon and the formation of a new government was making it difficult to discuss the maritime border dispute. “But we’re hopeful that a new Lebanese government can be formed and that we can pick that up again because it’s very important to us,” the second US official said.

The US ambassador to Lebanon, Dorothy Shea, brushed off Hezbollah’s allegations during an interview with Al Arabiya English last week.

“I think there is an interest on both sides to try to give it another go,” she said, adding that Washington was exploring with both sides whether it makes sense to resume “some form of talks.”

Shea said she believed the next round of talks would not be in south Lebanon “until we get more of a sense of agreement about what they’re negotiating over.”

The diplomat also revealed to Al Arabiya English that talks were held last week among US officials about “some creative ideas that we might be able to bring to the table” as mediators.

Pushing back against Hezbollah’s claims that the US was blocking efforts to solve the maritime dispute, Shea said: “The last I checked, the United States offered its services as a mediator and facilitator as a goodwill gesture. We’re not being compensated for that … so we wouldn’t be doing that if we wanted it to fail or if we were just serving the interests of one party, which we were also accused of.”

“But ultimately, the parties need to regroup a little bit because they had reached the point of disconnect about what they were even negotiating over,” she said.