Vatican’s Secretary for Relations with States arrives in Beirut 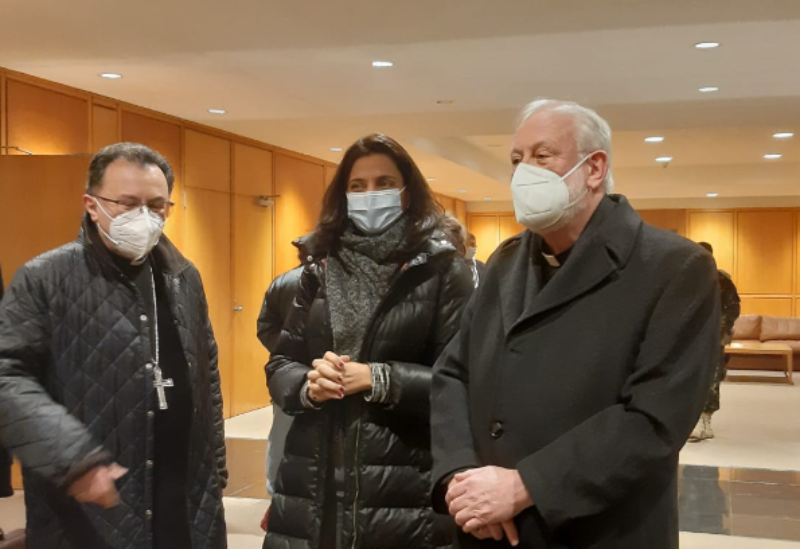 Monsignor Richard Gallagher, the Vatican’s Secretary for Relations with States, arrived this evening at Rafic Hariri International Airport – Beirut, accompanied by a Vatican delegation, on an official visit to Lebanon, during which he will meet with President of the Republic General Michel Aoun, Speaker of Parliament Nabih Berri, and Prime Minister Najib Mikati, in the presence with spiritual leaders from all sects.

Lebanon’s Ambassador to the Vatican, Vatican Ambassador to Lebanon Monsignor, Director of Protocol at the Ministry of Foreign Affairs and Secretary of the Lebanese Maronite Congregation welcomed Gallagher and the accompanying delegation.

“This visit is part of the Vatican’s continuing concern in the situation in Lebanon, and a follow-up station that began with the visit of Cardinal Parolin, days after the port explosion,” Lebanon’s Ambassador to the Vatican stated in the airport’s hall of honor. Then, in addition to the well-known stances and help that led to this visit, there was a conference of the heads of churches in Rome, in the presence of the Pope for a whole day.

“It is the first visit of the Vatican’s foreign minister, Monsignor Gallagher, to Lebanon, who will participate in the conference on: Lebanon the message… the words of Pope John Paul II, which were stated more than thirty years ago, and he will give a speech at the conference,” he noted. This topic has been coordinated with him in order to coincide with the visit.

“We, as Lebanese, are entrusted with the words of Pope Saint John Paul II and his interest in Lebanon, as well as the validation of these words by Pope Francis, who developed it,” he continued.

He continued, “Despite all the crises and disasters we are going through, there is a peculiarity in Lebanon that does not exist in any other country, especially in the regional environment.”

He considered that “Lebanon’s crises today are not related to the management of coexistence, but rather to the failure to manage public affairs,” pointing to “the peculiarity of coexistence among all Lebanese.”

“Minister Gallagher will cover numerous concerns,” he stated, adding, “The challenges we have in Lebanon are not entirely foreign, but there is a domestic cause, and I do not believe that internal issues can be fixed by anybody.”

“The foreign problem is complicated. Of course, the relevant parties, whether the Vatican or others, have a role to play. There is seriousness, responsibility, and an audible voice in the Vatican’s diplomacy with the main countries, whether in Europe, America, or elsewhere, and Lebanon is a set item on the agenda of Vatican diplomacy,” the Ambassador concluded.