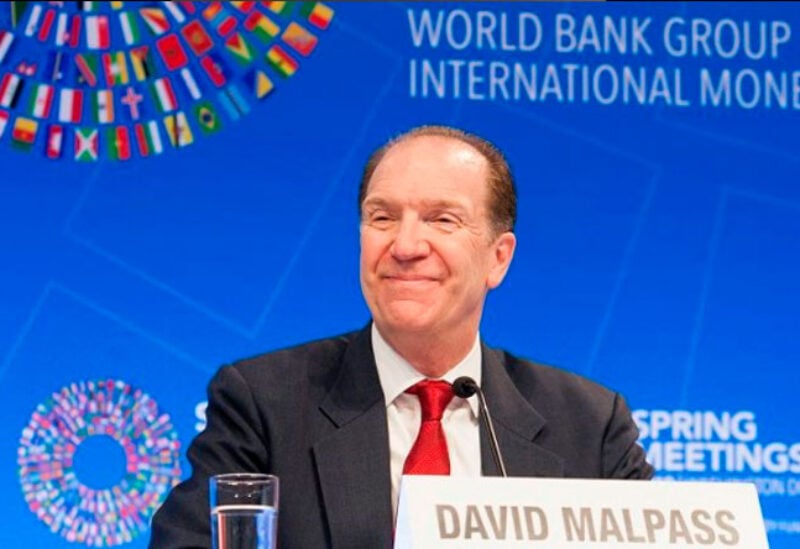 Stances of Malpass and Georgieva came in their speeches while participating in the Conference for Supporting Lebanon and the Lebanese in Paris.

The Conference convened yesterday through video technology, through which 33 countries, 13 international organizational and 5 representatives of the Lebanese civil society participated.

President of the World Bank:

“We are here today to confront the worsening humanitarian crisis in Lebanon in support of the Lebanese people, who are of vital importance to the world. The Lebanese people, like all other peoples of the world, deserve access to food, water, medicine and sanitation.

There is an urgent need to form a government capable of reform, providing these basic services and putting an end to corruption.

However, the continued flow of supplies into the country, even food and water supplies, is at risk, and the Lebanese Lira and the banking system are in a state of collapse. We describe this as a “Deliberate depression” given that previous governments and their supporters had done so much damage.

Lebanon must find a way to form a government which upholds the principles of transparency, human rights and the rule of law that ensures accountability of all institutions. The Lebanese people need freedom, security and investment to continue to grow, and the government must renew its strong commitment to a transparent national currency that retains its value to stem the waves of inflation.

After the Beirut Port explosion, the World Bank Group, in cooperation with the UN and EU, quickly prepared a damage and needs assessment, and our experts worked day and night to respond to this emergency.

Lebanon has been one of the first beneficiaries of the World Bank’s global support for COVID-19 vaccinations, and now Lebanon urgently needs to get more of those vaccines. We urge the government to scale up vaccination campaigns. We are currently working to increase vaccination rates, including for refugees and other groups mostly in need.

We have been associated with the provision of large financing resources to the emergency project to support the social safety net in Lebanon, in order to provide emergency cash transfers and social services to the poor and needy groups. I call on the Lebanese authorities and the Central Bank to take immediate and necessary steps to start disbursing this cash assistance to the eligible beneficiaries.

Providing reliable and affordable electrical supply is essential to business, families, education and maintenance of water and sewage systems. Lebanon must take over the repair of the electricity network and halt losses.

In this regard, I cannot fail to add my voice to that of Mrs. Christalina in calling for an audit of Central Bank and EDL accounts. I also call on Lebanon’s neighboring countries, including Syria and its partners, to cooperate in transporting gas and electricity across the border. This could immediately save hundreds of millions of Dollars in benefits, while at the same time improving public services.

As of tomorrow, we will support small businesses which were affected by the Beirut Port explosion, through the recently approved Rebuilding Beirut Business for the Better (B5 project).

We are working with partners to rebuild the port of Beirut, and we are asking the government to speed up the ratification of the Lebanese port and port system, which lays the foundation for the organization and management of a new, more transparent port.

I look forward to working with all of you here today for a better future for Lebanon”.

“Since we met after the tragic Beirut Port explosion last August, parts of the city have been reconstructed and there was hope at the time that this tragedy would lead to the convergence of the will of all to carry out broad political, social and economic reforms.

Unfortunately, this did not happen. On the contrary, what we see is a sharp deterioration in the living conditions of the Lebanese people.

Many speakers highlighted the humanitarian crisis in Lebanon. So let me add one point about the economy. The economy has already shrunk by about a third since 2017—and is expected to contract further in 2021-2022. Unemployment has also reached a very high rate. Above all, the pandemic continues to take a heavy toll on the country.

President Macron, this is the context in which you have arranged for us to speak of those who have endured excessive neglect of their urgent humanitarian needs, and excessive delay in reforming the weakened economy.

Therefore, for us at the IMF, we see an urgent need to act today, and we attach great importance to transforming the Lebanese economy in the longer term.

On the urgent need for action, as you mentioned. I want to thank you personally for your leadership on the new allocation of SDRs. We now have the outcome of the 2 August vote in the Board of Governors on the issuance of new SDR allocations of 650 $1 billion to be distributed within two weeks according to membership quotas. For Lebanon, this is not a simple matter. Through this distribution, Lebanon will obtain Special Drawing Rights equivalent to $860 million at this difficult time to increase its depleted reserves and also to help meet the many urgent needs of the Lebanese people.

It is essential to use these SDRs responsibly and wisely. It is important everywhere, but very important in Lebanon given the critical juncture it is going through. These provisions are a valuable resource. It must be distributed to achieve the maximum benefit for the country and its people.

Of course, how to use the SDR is a sovereign decision, but it must be a sound one. The Lebanese people have a right to know what a distributed SDR will bring them. I call on international and local partners to work with us to help ensure transparency and accountability in the use of Lebanon’s new SDR allocation.

But the SDR will not solve Lebanon’s longer-term structural and systemic problems. What do we need to solve it then? We need a government with the necessary powers to reform and revitalize the crippled Lebanese economy.

We know the areas in which to move. And we know what to do:

First, direct treatment of the core problem of weak governance, by strengthening the fight against corruption, improving the performance of state functions, especially the management of companies owned by them.

I would like to focus here on the energy sector as the most important area for action, in addition tocompleting the audit of Central Bank accounts,and the electricity supply company.

Second, implement a fiscal strategy which combines deep debt restructuring and reforms to restore Lebanon’s credibility, with attention to social spending as part of this strategy.

Third, a comprehensive restructuring of the financial sector, and recognition in advance of the losses of private banks and the Central Bank, but in a way which provides protection for small depositors.

Last but not least, we need a reliable monetary and exchange system, based on standardization of exchange rates. We have been available for dialogue with the Lebanese authorities over the past year, but I will be very frank with you, communication has been severely restricted due to the absence of a functioning government.

Therefore, I would like once again to urge Lebanon’s political leaders to come to consensus on a new government which has the will and power to implement reforms.

My final message to the wonderful Lebanese people is: We stand by your side, and look forward to a government which takes steps forward so that we can all join forces to extricate Lebanon from the recent tragedy”.