Wounded Irish peacekeeper will be evacuated from Lebanon 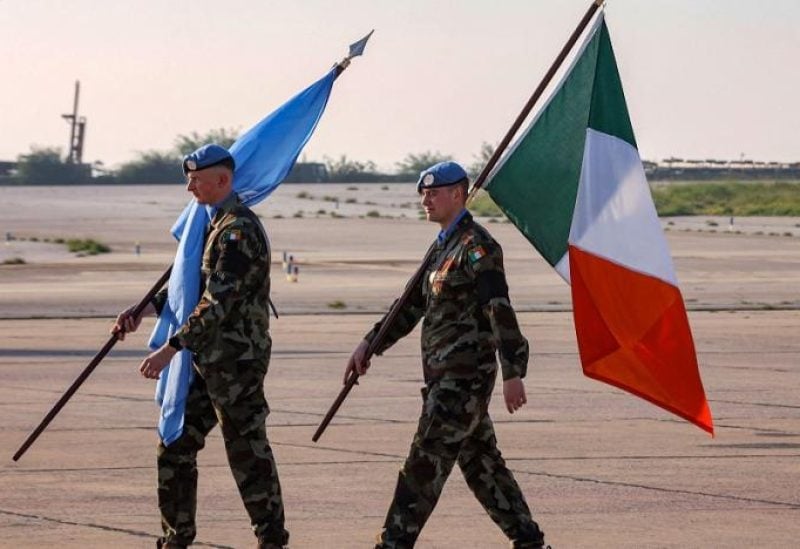 Irish peacekeepers of the United Nations Interim Force in Lebanon (UNIFIL) walk with the UN and Irish flags during the repatriation ceremony for Irish soldier Seán Rooney who was killed on a UN patrol, at Beirut international airport on December 18, 2022. (AFP)

A wounded Irish UN peacekeeper in Lebanon was transferred on Wednesday from a hospital to Beirut’s international airport to be medically evacuated to Ireland.

Unidentified attackers opened fire on 22-year-old Pvt. Shane Kearney and three other Irish soldiers with the United Nations Interim Force in Lebanon (UNIFIL) last week as their convoy passed near the southern town of Al-Aqbiya. The area is a stronghold of the Lebanese Hezbollah party.

Kearney suffered from blunt force trauma to the head in the attack, and is in serious but stable condition.

Pvt. Seán Rooney, 24, was killed, while the two other soldiers were lightly wounded. Rooney’s body was returned to Ireland on Sunday after Lebanon and the UN held a memorial for him. A security official told The Associated Press that Rooney was shot in the head.

Lebanon, Ireland, and the United Nations are holding separate investigations into the attack, but have yet to share any findings or issue any arrest warrants. The official told the AP that investigators had retrieved seven bullets from the vehicle.

The Irish military in a statement Wednesday said Kearney will be evacuated in a “specially equipped medical aircraft” to Casement Aerodrome, a military base southwest of Dublin, and will continue his treatment at Beaumont Hospital.

UNIFIL was created to oversee the withdrawal of Israeli troops from southern Lebanon after a 1978 invasion. The UN expanded its mission following the 2006 war between Israel and Iran-backed Hezbollah, allowing peacekeepers to deploy along the Israeli border to help the Lebanese military extend its authority into the country’s south for the first time in decades.

That resolution also called for a full cessation of hostilities between Israel and Hezbollah, which has not happened.

Earlier Wednesday, Israeli troops lobbed smoke bombs at Lebanese soldiers and residents in the southern Lebanese border town of Al-Hamames, as they set up barriers and barbed wires near its frontier.