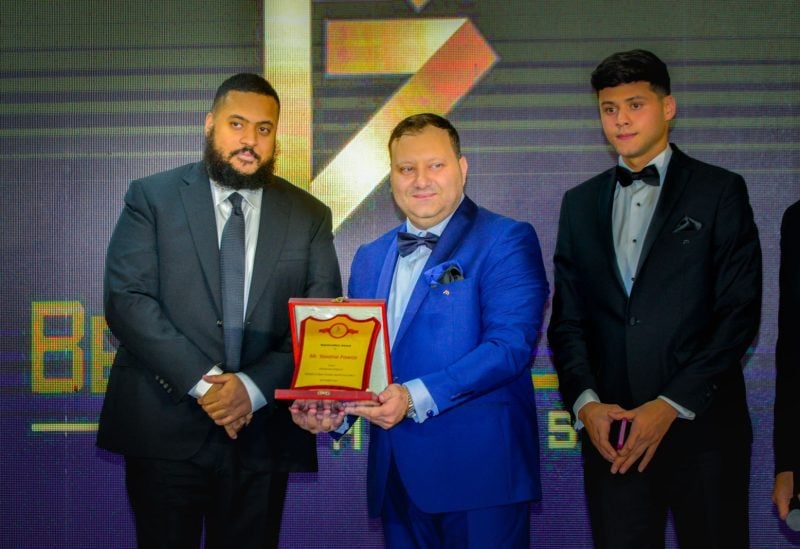 The 2022 Beirut Golden Awards Association Humanitarian Award has been granted to Yassin Fawaz in recognition of the philanthropist’s longtime dedication to charitable endeavors. “It deeply affects me that this prize is Lebanese. It means a lot to be recognized, and it’s an honor to be recognized alongside the great Lebanese artist Walid Toufic who also won medals during the occasion”, said Yassin Fawaz of the Beirut Golden Awards, known throughout the nation for their tremendous donations.

The H.E. Judge Mohammad Mortada, Minister of Culture, presided at the 2022 Beirut Golden Awards. According to a statement from the organization, “the Humanitarian award is granted yearly to a public figure, an artist, a couple, or group in appreciation of their social involvement and generous support of humanitarian interests and causes.

“The global success of Yassin “KingRolodex”Fawaz makes every Lebanese proud. What Yassin has done with his success is something that we can be doubly proud of–and this is to improve the lives of people in need, in Lebanon and around the world. His altruism, in a word, is exemplary,” said Mohammad Halawani, President of the Beirut Golden Awards Association in a statement.

The Beirut Golden Award Association has always received financial support from Yassin Fawaz “King Rolodex” over the past years and he has never held back from given to those in need.

“Throughout his professional life, Yassin Fawaz, has made it his mission to ensure his financial accomplishments were used to improve our community and beyond. Yassin’s support of organizations, foundations and initiatives working to make the world a better place aligns with our organizations desire to do the same,” he continued. “In recognition of his philanthropy, Yassin Fawaz is admirably deserving of the 2022 Beirut Golden Award Association Humanitarian Award and on behalf of myself and our organization we honor him for his charitableness, humanness and unspoken kindnesses.”

Over the past several years, Yassin “KingRolodex” Fawaz has donated huge amounts to a variety of causes, and his humanitarian work can be seen on his official TikTok account @kingrolodex. Yassin has impressively amassed over 1 million followers on his TikTok account since September 2022, where his videos have been going viral, with one of them reaching out to 63 million.

During the ceremony, Yassin was asked why someone like him, a public figure with enormous wealth would dedicate his life to serving others, he replied “with great popularity comes great responsibility”. When asked about which social media platform he likes the most, his response was “of course TikTok”. He considers TikTok to be the future of social media and has used his TikTok particularly to represent proud Lebanese in front of a global audience, but considers himself to be a true citizen of the world. And he lives that role offstage as well, with philanthropic activities almost too numerous to count. Social issues, humanitarian relief, food security, cultural and women’s rights. It takes a person of principle to see the big global picture and imagine numerous ways they can pay their blessings forward and create change.

After receiving the award, Yassin Fawaz thanked the organization and all the attendees, and announced his upcoming project “Kings Plan”, an NGO with a global vision of fighting poverty and supporting humanitarian causes around the world.