Aoun wants Maalouf, and disagreement between “Kanaan and Bou Saab” endangers the list

The Free Patriotic Movement’s electoral machine in Matn, is in a state of confusion and fragmentation as a result of differences between Representatives Elias Bou Saab and Ibrahim Kanaan and Edy Maalouf.

According to special information to “Sawt Beirut International” website, the Tayyar is focused in its battle on bringing down candidate Melhem Riachy, which Ibrahim Kanaan considers impossible because the voices of the Lebanese Forces in the Metn will go to Riashi, and ]it is very difficult to bring him down. Also, the Tayyar has retreated a lot in the Matn and is heading towards loosing at least one seat, according to figures.

The Tayyar no longer has the ability to regulate, which would allow it to distribute the votes to Kanaan, Bou Saab and Maalouf, who is the weakest link in the movement’s list, and the dispute is between Bou Saab and Kanaan on the one hand, and on the other hand between Kanaan and Bassil, who prefers Edy Maalouf, which Kanaan is well aware of, as he is carrying out an operation through buying the votes of Elias Bou Saab.

The information confirms that the President of the Republic, Michel Aoun, directly intervened and dispatched someone from the palace to say that the president wants Maalouf, and the preferential votes must be in his favour.

There is another opinion within the Tayyar’s machine, which says that focusing on the distribution of votes between Bou Saab and Kanaan is easier and ensures that they reach the parliamentary symposium, as they enjoy wide popular support, while Maalouf is very weak and needs all the votes of the supporters of the movement in order to win, and this is very important. The danger is that it exposes Bou Saab and Kanaan to an inevitable loss, in addition to the fact that the process of revenge against Riachi is costly for the movement.

Inside information shows that shooting at Maalouf will be costly, and the price is the arrival of two deputies from the Lebanese Forces in Matn, but if the votes of the current are distributed between Kanaan and Bou Saab, the Forces will win only one seat. 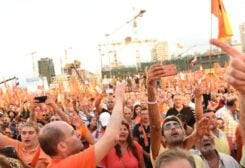