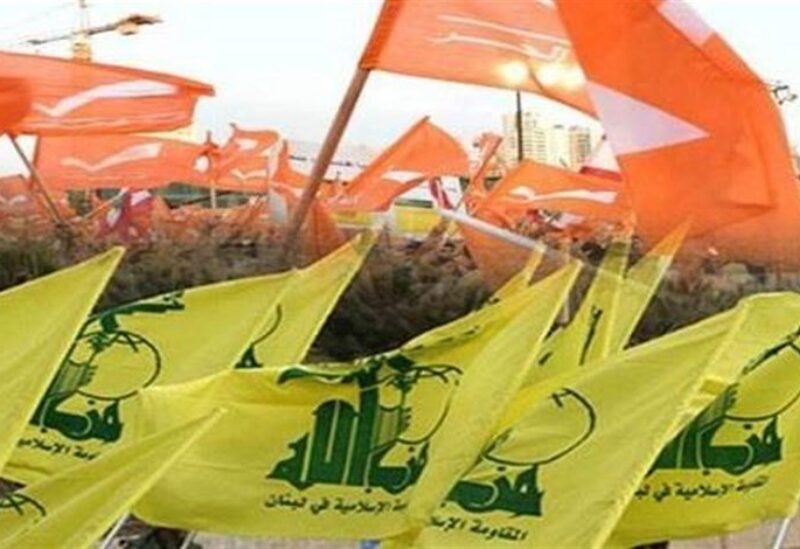 Hezbollah and the Aounist movement flags

Once the responses increased, to the Deputy Secretary-General of Hezbollah, Naim Qassem’s stance, about what he said regarding those who do not want to join what Hezbollah wants, “let him look for another solution,” he published a clarification through a newspaper, pointing out that there is an “instruction”about an intense attack to discuss an idea that does not exist. This is in the same context that the party has been pursuing for some time, and it can be classified in the category of defense because it has lost its ability to attack. For a while, it no longer has the ability to tightly control the joints of the arena, although still controls them from within state institutions, according to what an informed source told “Sawt Beirut International.”
Moreover, according to the source, the intermittent “sniping” between the party and its ally, the “Free Patriotic Movement,” which is an attempt by the latter to pressure the recommendation of Representative Gobran Bassil as a presidential candidate. This was evident in President Michel Aoun’s speech to the Editors’ Syndicate delegation , where his speech was overshadowed by the electoral and marketing nature. Of course, the Speaker of the Lebanese Parliament, Nabih Berri, is taking charge of the confrontation on behalf of the party, by emphasizing the holding of the parliamentary elections, the results of which the “Free Patriotic Movement” is now sensing, which, even if Bassilis to return to Nejmeh Square, with an acceptable score, he will not be able to brag of his representation of the Christians’ largest bloc.
The source continues that the Shiite duo is somehow indifferent about the elections’ results, especially since the current electoral law will not make a big change in its bloc, and this matter is due to the nature of the areas that are considered as its strongholds, especially in the south and Baalbek, despite the emergence of great opposition in its environment, but it will make every effort to maintain its control, which makes the arms wrestling between it and the Tayyar, a mere political blackmail that “does not spoil the friendly issue” because breaking the alliance between the two teams will accumulate the losses they have already incurred. The Tayyar is suffering at the popular level in terms of the decrease in the number of its supporters, and even within its cadres, where restlessness and internal resignations have started.
As for Hezbollah, its condition is not any better, especially financially, after the sanctions that affected Iran, and led to a weakness and deficit in its budget, and it no longer has the ability to support the party, which was recently revealed in the most important financial source, the “good loan” as its movement has become restricted, especially In Syria, after the Syrian President’s attempts to return to the Arab axis, and the losses incurred by the Israeli raids on his warehouses and the loss of many of its experts in Yemen. The phrase “Hezbollah is a terrorist, terrorist” became synonymous with the Lebanese people during the demonstrations, and the demand for its disarmament is no longer forbidden or sacred, and this explains the concessions, that weigh it down, the last of which was Georges Qordahi’s issue.