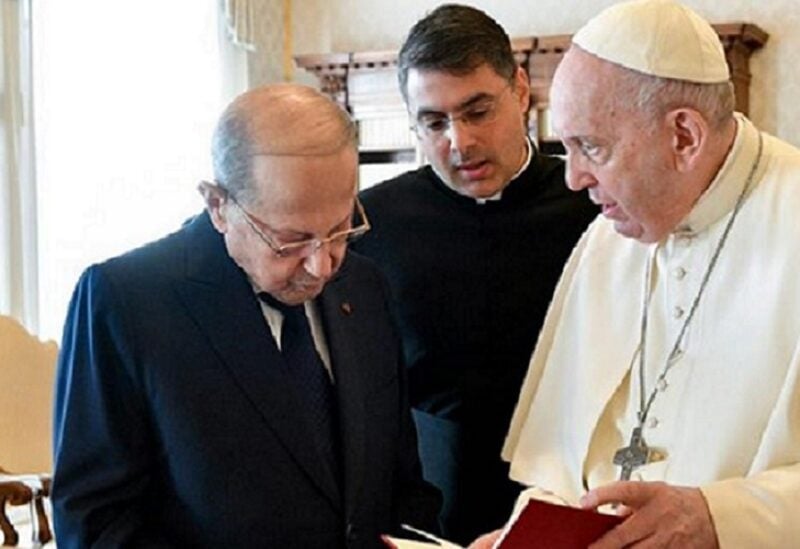 A lot was said about President Michel Aoun defending Hezbollah, and trying to polish its image, during his visit to Rome and meeting with Pope Francis, and his marketing of the idea, that Hezbollah protected Christians.

For Aoun, that was not enough, but went a long way in his “mortgage” to the party, and gave a deed of innocence to the party’s weapons, for all of its crimes and assassinations.

In this context, sources following the meeting of Pope Francis and Aoun indicated to “Sawt Beirut International” website, that the Supreme Pontiff is fully aware of the Lebanese file and its accurate details, and he follows up on Lebanon periodically, and the Maronite Patriarchate sends him reports on the Lebanese situation, and the related events taking place.

The sources added, “No matter how Aoun tries to polish the party’s image, Pope Francis is not influenced by words, and he is known to scrutinize all the files that attract his attention, and Lebanon is one of the priority files for the Vatican, as it closely follows the details of Lebanese politics, and is especially aware of how Hezbollah deals with the Lebanese politics.

The sources confirm that Pope Francis’ opinion does not differ much from the countries’ view of Hezbollah, and its classification on the terrorist list.

And thus, the sources say, “No matter how Aoun tries to dilute the true image of the party, nothing is hidden from the Vatican, and no matter how much Aoun forgets what has the party done on May 7th, and that it assassinated the martyr Prime Minister Rafik Hariri and all the martyrs of the Cedar Revolution, in addition to the assassinations of journalists and activists opposed to its environment, and disrupting political life in Lebanon, controlling over the state’s decision and its domination, the truth is shining as bright as the sun, for Pope Francis.