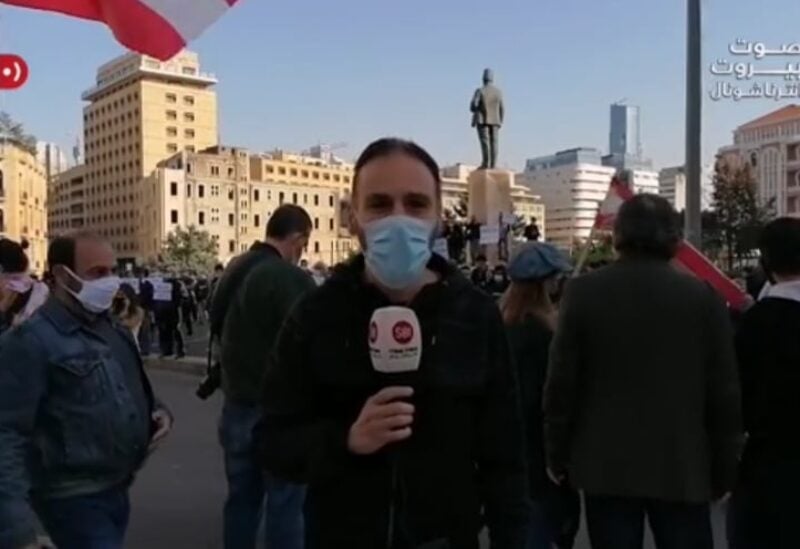 Lebanese people took to the streets late on Tuesday to protest the U.S. dollar exchange rate which hit an all-time high as the country’s pound currency was traded at 10,000 LBP to the dollar.

Under such circumstances, it goes without saying that reporters, correspondents and photographers would head to the streets in order to cover the events unfolding on the ground – from Tripoli to Zouk, Jal El Dib, Ring, Sidon, Chtaura and countless other regions.

Out of tens of reporters who were covering the news about nationwide protests, a group of young men affiliated with the “resistance axis” picked Rabih Chantaf, a reporter for Sawt Beirut International (SBI), to vent their anger as if he were the one responsible for the severe devaluation of the Lebanese pound!

We undoubtedly wish for the safety and protection of all fellow journalists and reporters, but isn’t it some kind of sick joke when such attackers turn a blind eye to the ones who caused the U.S. dollar exchange rate to spiral out of control as they vent their anger at fellow Rabih Chantaf?

Preventing Chantaf from covering news in Al Ring area doesn’t imply at all that Sawt Beirut International will be denied news coverage, especially after their previous attempt had been unsuccessful.

Hadn’t they assaulted Rabih Chantaf back in Nov. 24 also? Let me remind you: Chantaf was reporting a fire that broke out in Zkak Al-Blat region when a group of young men attacked him there. The reporter was transported to hospital as he was severely beaten. Despite the incident, the voice of Sawt Beirut International was never silenced nor did Rabih Chantaf stop his work.

Unfortunately, those who were supposed to be guardians of media freedoms and protectors of media professionals sat idly by, and we point our fingers to the Press Syndicate, the Editors Syndicate, the National Media Council, the Ministry of Information and the Parliamentary Media Committee.

The voices of the above-mentioned bodies were muzzled, and Rabih Chantaf has the right to inquire about their absence in light of such incident.

Who controls these media entities? Is it some sort of political remote control? Or is it a call from a friend?

Following the Zkak Al-Blat attack in November, Chantaf said: “I filed a criminal complaint against unknown people but they’re actually well-known,” and today he can reiterate that same words in Al Ring area: “unknown yet well-known”.