The Lebanese flag in Damascus, and the tongueless ministers. 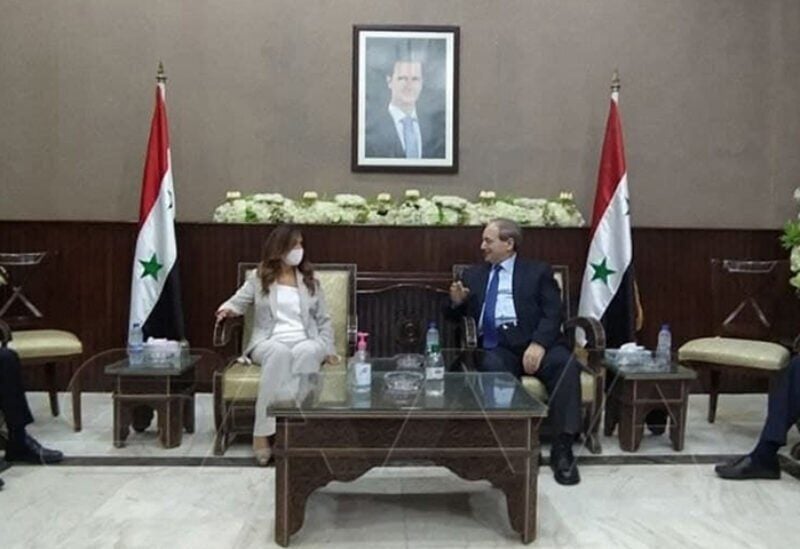 Akar and the Syrian foreign minister

Neither the presence of the Lebanese flag in the meetings of Aoun’s ministers with Assad’s ministers, nor its absence, will change anything. The Syrian regime will never recognize the Lebanese entity, nor does the Lebanese delegation, like the honorable ministers, understand the Assadists intended message.

Any of the members of the Aounite delegation did not even notice the absence of his country’s flag, as the “Syrianity”, dominates their thinking, and they mainly represent the Syrian line within the Lebanese system, and not the other way around, for they are servants of a Persian occupier who submits the two countries.

The official communication at this high level, between Lebanon and Syria, from security channels to public ministerial visits, and perhaps in preparation for a presidential one, makes the murderous Bashar al-Assad regime, the winner. This regime which Iran seeks to preserve as a political investment, and the loser is the Lebanese state, and here is the Republic of Hezbollah being completely achieved,  as the party controls over Foreign policies, defense, communications, energy, banks, ports and borders, and for God’s sake, is there a country in the world governed by an armed militia?

What Hezbollah militia is doing to Lebanon, the dominant Aounist regime that is affiliated with it, is doing to its citizens, so how can the President of the Republic allow Iran to use Lebanon as a headquarters and passageway for all its conspiracies? The answer is well known. Aoun is part of the Iranian structure in Lebanon. Talks about Iran’s victory over America, and forcing it to submit to breaking the sanctions and transferring gas and electricity from Egypt and Jordan to Lebanon, is wrong, because what is really happening,  is implementing an Arab, Jordanian, Egyptian will, to help Lebanon with a temporary American permission,  and with an Iranian submission,  because it is unable to administer occupied people without presenting services. Otherwise, the Iranian occupation in Lebanon goes towards the stage of inverted equations, which is represented by indirect cooperation with the Americans.

The Christian forces and even the Church’s silence towards the policy of President Aoun, who separated Lebanon from its Arab reality and international legitimacy, could be putting the Christians in one sack, and what can make a difference, is a  demand of his resignation, and the work to achieve it, is the beginning of the salvation path for Lebanon and all its people.

President Aoun has chosen to stand in the face of an American-Arab will in 1989, and the result was disastrous for Lebanon. And in 2016, President Aoun chose to get into Baabda, through the Iranian muscles, and without objection from anyone, to confront the Arabs and Americans, under the pretext of Christian rights, and the result was also disastrous. It seems that Hezbollah, and its supportive Iran, are strong against the Syrians, Iraqis, Yemenis and Lebanese only, while they are submitted to the Americans conditions, meanwhile, Lebanon is deprived from electricity and gas, because of the opposition and the war against the Arabs and America.

The pinnacle of Hezbollah’s loss in entering the oil and other commercial markets, is that it has transformed from it, from a party that raised the slogan of liberating Jerusalem, in defense of Arab and Islamic rights, and a policy maker in the region, to a bag dealer competing with merchants for storage and sale. This is Lebanon indeed, the mill of major projects, because facts indicate a path that differs from rumors. Hezbollah is in crisis, and its crisis lies in an Arab-Iranian dialogue, and understandings that might change the context of matters.