Will Antalya’s meeting save Kyiv from falling? 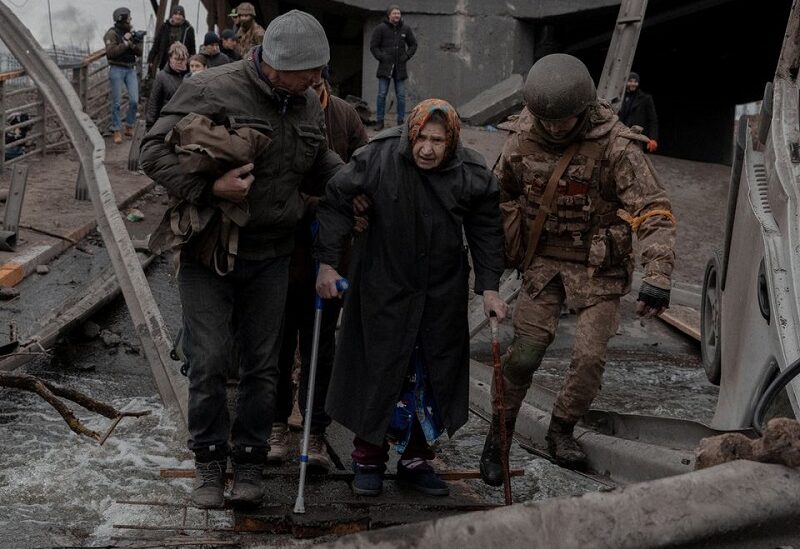 An elderly woman is helped while crossing a destroyed bridge as she tries to leave the city of Irpin, in the Kyiv region, Ukraine March 5, 2022. Jedrzej Nowicki/Agencja Wyborcza.pl via REUTERS

The awaited for event today in Ankara between Russian Foreign Ministers Sergey Lavrov and Ukrainian Dmitriy Kuleba in Antalya, on the sidelines of the political forum, may change the existing equations and efforts to resolve the crisis in Ukraine.

Turkish President Recep Tayyip Erdogan was able to achieve a diplomatic breach, after an intensive contacts he had with Russian President Vladimir Putin and Ukrainian President Volodymyr Zelensky, and he managed to breach the wall of war between the two countries, at least in an advanced and initially successful step.

This meeting, at the level of foreign ministers, was the fruit of the Turkish mediation led by Erdogan, as European diplomatic sources considers, which expanded to include contacts with other countries in the Union and NATO.

The Turkish endeavor, and according to international affairs’ observers, has important and basic implications, as Ankara wants through the success of this meeting, to show European countries and America, that it can play a major and greater role in bringing the two conflicting parties closer together, as it tries to impose itself as a pivotal country, at the gates of Europe.

Amid these European fears of the outbreak of a third war in the blonde continent, the specialist in French and international affairs, lawyer Carol Saba, ruled out “the outbreak of a war, because the parties concerned in this conflict have agreed on red lines that cannot be crossed, the most important of which, is that there is neither confrontation nor Friction between the Russians and the Atlantic, and that there will be no air embargo on Ukraine from the Atlantic against Russia, and this implies allowing the Russian side, or, not preventing it from ending its operation and achieving its goals.

Saba confirms to “Sawt Beirut International” website that the difficulty in negotiating today is that negotiations are taking place between three parties, Russia, Europe, and Washington, i.e. the Atlantic. So everyone knows the limits of the game.

The new equation that confuses everyone is nuclear terror, and the possibility of rolling quickly into a deadly confrontation, that may affect everyone, and this matter was understood by both parties, which explains that there is no air embargo on Ukraine against the Russians.

Regarding the possibility of reaching new understandings and alliances between Russia and the European Union, lawyer Saba says, “Before the war, there were fears, dangers and “demands” on both sides. Russia wants to neutralize the regime in Ukraine and prevent it from qualitative, nuclear and conventional militarization, and turning into an advanced base for the Atlantic, while the Europeans had fears of Russian power and its dangers to security and stability in Europe.

Today there is a “fait accompli”: first, the war took place, and secondly, the war was drawn on the ground, through the logic of force.

Therefore, we find that this matter will be translated through new understandings and agreements for security and stability in Europe, and this is precisely what is happening.

He considered that “Putin has three military objectives. First, annex of eastern Ukraine’s regions and cities, where the Russian element is dominant, and bringing it into contact with the Russian depth, and secondly, the control of all the cities of the Ukrainian coast from the city of Mariupol in the east to the city of Odessa in the Ukrainian coastal west.This enables President Putin to untie the Crimea, where the Russian naval bases are, and to control all sea entrances in the Sea of Azov in the east to the Black Sea in the west, thus isolating Ukraine from the seas.
As for the third goal, it is to besiege Kyiv without entering it, especially isolating it in areas southwest of Kyiv, which prevents western supplies from it.

He said: “These objectives are military, but today they become political cards for negotiating the regime to neutralize the government in Ukraine. More than ten days after the start of the Russian-Ukrainian war, I believe that President Putin has achieved all three goals.”

In parallel, the leaders of the European Union will meet in Versailles today at the invitation of French President Emmanuel Macron to discuss the developments in Ukraine in light of the imposition of new economic sanctions against Russia.

The European side, according to diplomatic sources in France, is divided between a group that supports the imposition of more economic sanctions on Russia and its crushing, and a group that opposes the idea due to the repercussions that will result from this matter, which will affect several European countries whose economy is based on gas and oil from Russia.

And while France supports diplomatic efforts and is supported by a number of European countries, the United States seeks to push the Europeans to abandon Russian energy and take a stance similar to the United States by imposing an embargo on energy imports.

A final indication that a large number of EU countries depend on gas and oil from Russia, and the Russian energy is also essential to the world’s oil supplies.