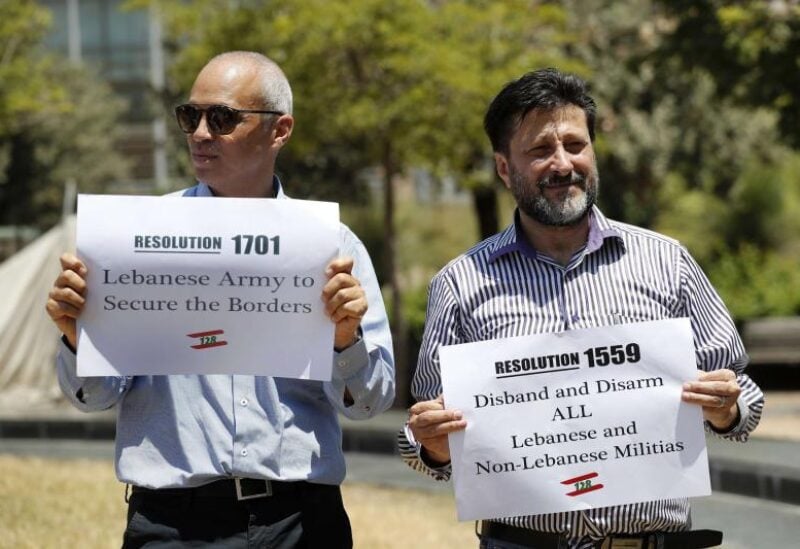 Protest to demand implementation of Resolutions 1559 and 1701

Foreign occupation of a country, is not restricted to a military status only, i.e. “the entry of armed forces into another country despite the state and the people and the violation of national sovereignty,” according to diplomatic sources.
The National Council for “Lifting the Iranian Occupation of Lebanon” has found provisions in the international law, for Lebanese to use as a pretext, in order to restore Lebanon to its independence and sovereignty over its teritorries, and relieve it from foreign influence. These provisions are not limited to the idea that there are no Iranian forces on Lebanese soil. Nor limited to the influence of other countries in Lebanon, such as the United States, France and Saudi Arabia.

Dr. Tawfiq Kaspar says that the United Nations General Assembly approved the so-called indirect occupation, and applied it to African countries. This decision includes what means that the occupation takes place within the framework of an armed group within a country conferring with a foreign country, which is considered an occupation. This was applied to international courts, to the International Red Cross, to the Yugoslav court, and to the problems between Uganda and the Congo. This principle applies one hundred percent to the situation of “Hezbollah” in Lebanon. It is the beginning of the road, and it aims to restore Lebanon to a normal state with no occupation. Minister and former MP, Dr. Ahmad Fatfat, clarified that this gathering is not for electoral purposes, but rather to work towards lifting the Iranian occupation. This move is the beginning, just as we launched the move in the direction of lifting the Syrian occupation of Lebanon, when favorable internal, regional and international conditions occurred. We must now raise the slogan, because this endeavor is the basis and the way out, for all that we suffer in Lebanon.

But the question remains, will it be possible to reach a Security Council resolution on lifting the Iranian occupation, similar to the Council’s resolutions related to Syria’s withdrawal of its army from Lebanon through Resolution 1559? Fatfat says that it is the beginning and the work is serious. Let us wait for what will happen. We will work according to the slogan of eliminating the Iranian occupation, based on the main sovereign titles emanating from the Taif Agreement Conference, respecting Arab legitimacy, non-interference in the affairs of Arab countries, and respecting and implementing international legitimacy resolutions, including 1559 and 1701.

Diplomatic sources believe that under the title of non-interference in the affairs of Arab countries, Lebanon must commit itself not to send any forces to any other country, including Syria, Iraq and Yemen. The presence of “Hezbollah” in these countries means that an armed group from Lebanon is interfering in the affairs of other countries. In addition, any Arab or Western country that cares about Lebanon and takes the initiative for the sake of its citizens, did not arm any Lebanese team, in parallel with Iran’s arming Hezbollah, in the context of resistance.

The sources pointed out that what is important is to have a street pulse similar to the one prevailed when seeking to expel Syria from Lebanon, which entered as an Arab deterrent force, and later became an occupation. Now Iran is present as a fait accompli in Lebanon in terms of politics and influence. At the height of the international negotiations with Iran, the Lebanese voices are getting stronger to remove its influence off Lebanon and to re-examine the balance of the Lebanese state, and Lebanon’s history and its political function. The opposition to the Iranian presence and influence is intensifying due to the progress made in the Vienna negotiations and the beginning of the Iranian plan’s decline in all areas of influence, including Lebanon, in addition to the beginning of the decline of Iran’s plan to defend its regime and the exaggeration of its nuclear program, which is representing a burden on it.