Who will Sunni representatives vote for in consultations?

On the eve of the binding parliamentary consultations, the picture is no longer blurry among the various parliamentary blocs, especially among the sixteen Sunni deputies. Sources accompanying their meetings revealed a tendency to rename the caretaker prime minister, Najib Mikati, to form the new government.
Dar Al-Fatwa has witnessed a remarkable movement of parliamentary visits in the past hours, to find out the Sunni candidate who is sponsored by it. The Sunni charter exists, as long as the Sunni representatives will name the designated president along with representatives from other sects, according to Dar al-Fatwa.
The Grand Mufti of the Republic, Sheikh Abdul Latif Derian, confirmed that parliamentary consultations are dedicated for choosing those who have wisdom, knowledge, and a clear vision to address the difficult situation that Lebanon is going through. Addressing the deputies, he said: “Strengthen your unity, and solidarity, and make Lebanon’s interest your first and foremost goal.”
Forty-eight hours before the assignment of the last prime minister in the last part of President Michel Aoun’s term. So, who will assume this responsibility at this sensitive stage in Lebanon’s history? 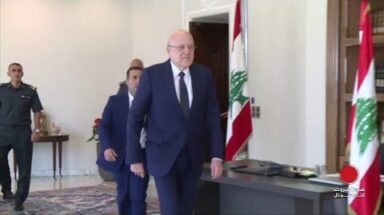