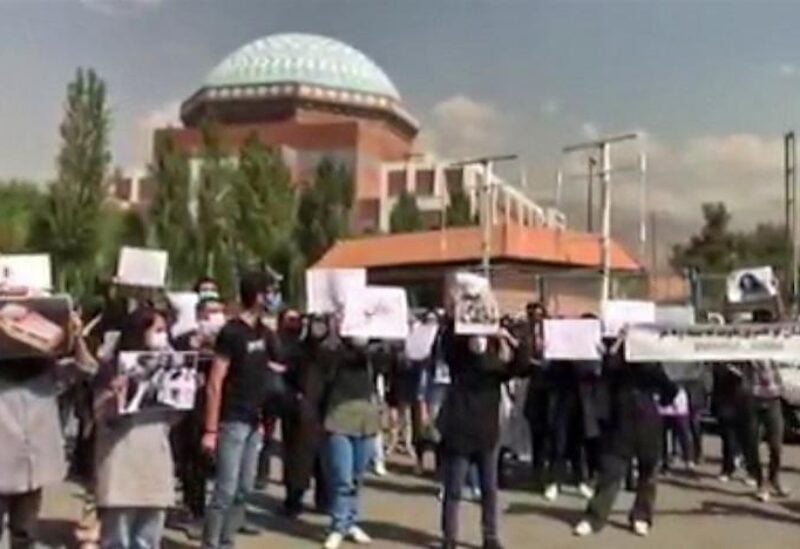 Students at Allameh Tabataba'i University (ATU), an Iranian public university, protesting following the controversial death of a young Kurdish woman while in custody by the "morality police", which enforces strict dress codes, in Iran's capital Tehran on September 19, 2022. (UGC / AFP)

Amnesty International declared that at least 23 children have been killed in a brutal crackdown by the Iranian regime on protests that erupted following the death last month of 22-year-old Mahsa Amini in police custody.

A report released by the rights group said the children, the youngest of whom was just 11 years old, were killed by Iranian security forces in the last 10 days of September.

Protests have rocked Iran since Amini’s death in the custody of morality police, who had detained her for not wearing her hijab correctly. Hundreds of others have been killed in the violence and unrest since.

The “brutal crackdown” by the Islamic regime “on what many in Iran consider an ongoing popular uprising against the Islamic Republic system has involved an all-out attack on child protesters who have courageously taken to the streets in search of a future without political oppression and inequality,” Amnesty said in statement.

According to the rights group almost half of the victims are of an ethnic minority group and were killed during the so-called Bloody Friday on Sept. 30, the deadliest day of the violence in Iran.

“Iran’s security forces have killed with absolute impunity at least 23 children and injured many more in a bid to crush the spirit of resistance among the country’s youth and retain their iron grip on power at any cost,” Amnesty said.

The report does not include figures on children killed in October, but the group said the actual number was likely to be much higher than 23.

It said it had recorded the names and details of 144 men, women and children killed by security forces in Iran between the start of the protests and October 3.

Iran’s supreme leader, Ayatollah Ali Khamenei, has called the protesters “agents of the West” and called for them to be punished, according to state news agency IRNA.