’34 airstrikes in past 24 hours’, Zelensky says there is no ‘pause’ in Moscow’s attacks 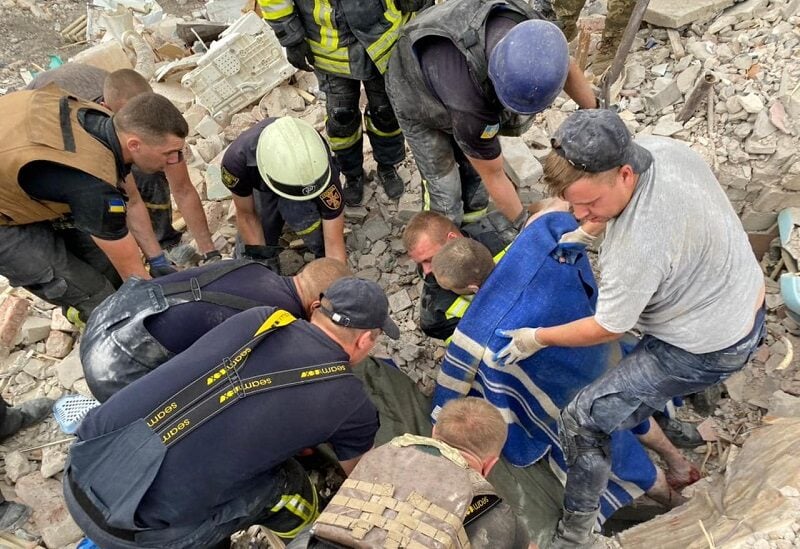 SENSITIVE MATERIAL. THIS IMAGE MAY OFFEND OR DISTURB Rescuers release a man from debris of a residential building damaged by a Russian military strike, as Russia's attack on Ukraine continues, in the town of Chasiv Year, in Donetsk region, Ukraine July 10, 2022. Press service of the State Emergency Service of Ukraine/Handout via REUTERS ATTENTION EDITORS - THIS IMAGE HAS BEEN SUPPLIED BY A THIRD PARTY.

The war-torn country’s President said in his nightly address on Sunday, that there was no let-up in air strikes from the aggressor Russia, on Ukraine, refuting claims that Russia’s airstrikes on his country had been “paused”. His statement comes after officials in Ukraine’s Donetsk region, said that at least fifteen people have been killed and an additional two dozen were feared to be trapped under the rubble after Russian Uragan rockets hit a five-storey apartment block. As per Zelensky the death toll from the attack in the Donetsk town of Chasiv Yar was likely to rise.
“Two residential high-rise buildings were destroyed. Dozens of people are under the rubble. Six were saved. There are 15 names in the list of the dead and, unfortunately, this is not the final number,” Zelensky said.

“34 airstrikes by Russian aviation in the past 24 hours, in one past day, is an answer to all those who invented this “pause”,” he said.

The Chasiv Yar apartment complex was the target of a strike on Saturday night, July 10, according to Donetsk Governor Pavlo Kyrylenko.
On Sunday afternoon, the local rescue agency reported 15 fatalities, adding that 24 more people might still be trapped beneath the rubble.

Zelensky said that “The Ukrainian army is holding on, holding firm,” adding “But, of course, a lot still needs to be done so that Russian losses become such that there will really be a pause.”

As per a Reuters report, Ukraine on Sunday also reported clashes with Russian forces on fronts in the east and south. Moscow, meanwhile, claimed that its forces had attacked hangars used by the Ukrainian army to store M777 howitzers made in the United States close to Kostyantynivka in the Donetsk region.