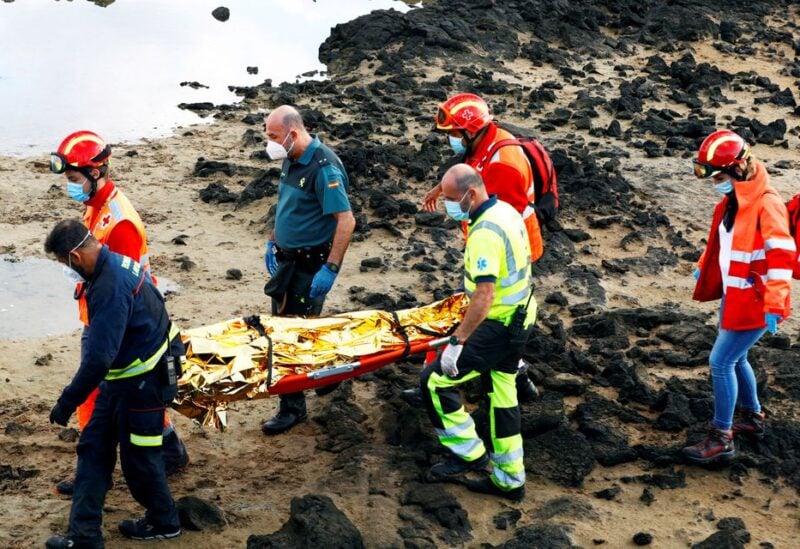 Rescue workers carry the body of a dead person after a boat with 35 migrants from the Maghreb region capsized in the beach of Orzola, in the Canary Island of Lanzarote, Spain, November 25, 2020. REUTERS/Borja Suarez/File Photo

Rescuing a sole survivor and retrieving the bodies of four deceased people, Spanish coastguards have recovered a migrant boat off one of Spain’s Canary Islands.

A Spanish NGO which works with illegal migrants said the boat was carrying 34 migrants. The sole known survivor, a 26-year-old man from the Ivory Coast, was cited as confirming this to the Spanish international news agency EFE.

The Salvamento Maritimo coastguard said on Sunday that a merchant ship recovered the boat 150 miles (roughly 240 kilometers) southwest of the island of Gran Canaria. The migrants were being taken to the island’s capital city of Las Palmas, and had been expected to arrive on Monday.

What happened to the sunken boat?
Helena Maleno, the head of Spanish NGO Caminando Fronteras, which helps migrant boats in trouble at sea and works with families searching for loved ones, said on Twitter that her organization had received an alert for a boat taking off from near the city of Laayoune on 24 September.
The organization, whose name translates in English as “Walking Borders,” reported the alert to the authorities at the time.

“Seven days of pain and waiting in which there was no news. Seven days that ended yesterday with the announcement of a new tragedy in one of the deadliest migration routes, the Canary Islands,” Maleno wrote on Twitter.

Maleno calculated the remainder of this sunken boat’s victims to stand at 29. She said their families likely would not even be able to recover their bodies, which had most likely been “swallowed by the ocean.”

How often does this happen?
The migrant route from West Africa to the Canary Islands across the Atlantic is among the deadliest worldwide.

Thousands brave the trip annually from northwest and sub-Saharan Africa, in search of better lives, undeterred by the frailty of the boats which carry them or the death of their predecessors.

The Atlantic Ocean is particularly infamous for its strong currents, which makes such trips more perilous.

Over 11,500 migrants have crossed into the Canary Islands this year, as per Spanish Interior Ministry figures on September 15. The figure is slightly higher than this period last year.

Maleno’s NGO says that over 900 migrants trying to reach Spain in the first six months of this year drowned or were lost at sea.