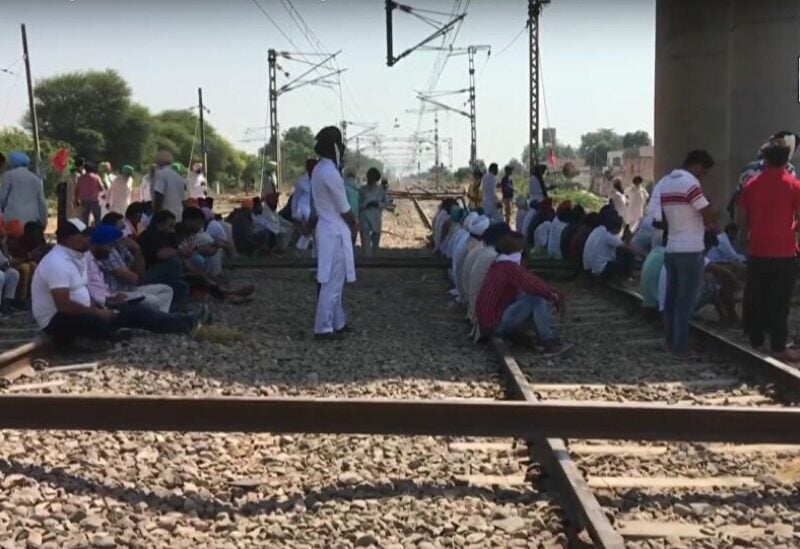 Last September, the federal government, led by Prime Minister Narendra Modi, passed three new farming-related Bills, which farmers’ unions consider injurious and, since November, thousands of farmers have been protesting all over the country to have the laws revoked. In the latest demonstrations, farmers have been blocking railways.

Farmer unions protesting against farm laws in India’s state, Uttar Pradesh, forced the railway authorities on Wednesday to cancel 40 trains and terminate the operation of 21 others.

A senior railway official said the step was taken as the farmers started protesting on the tracks.

“Because of the ongoing farmer protests, 40 trains have been cancelled and 21 trains have been terminated with immediate effect to ensure the safety of people. All those who booked the tickets online will get a refund for the same,” senior railway official, Sudhir Singh, told reporters.
Last week, also because of the protests, as many as 14 trains were cancelled, and some were diverted.

Thousands of farmers have been protesting against the federal government since last November.

Hundreds of sugarcane farmers who are pressing for a rise in sugarcane prices and who come from states which are on the verge of holding assembly elections – such as Uttarakhand, Uttar Pradesh, and Punjab – have now decided to intensify their protests by sitting on the railways.

Their protests seem to be bearing fruit since the Punjab state government on Tuesday announced a rise in the price of sugarcane.

A day later, on Wednesday, the federal government followed suit.

A two-day national convention of farmers is scheduled to take place in Delhi from Thursday. More than 1,500 farmers’ representatives are expected to gather in the capital city to work out a new strategy since the protest has been continuing on Delhi’s borders since last November.

One farmer leader, Yudhvir Singh, told Sputnik: “We have already decided to reach out to the villages and tell people about the ground realities. The schedule and details of future struggles will also be discussed in the national convention.”

Singh did not rule out a widespread political campaign in the poll-bound states of Punjab, Uttar Pradesh, and Uttarakhand against candidates who belong to the federally ruling Bharatiya Janata Party (BJP).

However, he added: “We will not seek votes for any candidate or party”.

Meanwhile, a farmers’ union in Uttar Pradesh is preparing a Mahapanchayat (villages council) for 5 September. “Similar conventions are planned in the Indian states of Jharkhand (12 September), Chhattisgarh (28 September) and Bihar (2 to 19 October),” Singh said.

A farmers’ group affiliated with Rashtriya Swayamsevak Sangh (RSS) – the BJP’s parent organisation – has written to Prime Minister Narendra Modi, asking for the Minimum Support Price (MSP) for all farmers to be guaranteed in law, failing which it has threatened to launch a nationwide protest.

The three farm laws which have caused such turmoil are: the Farmers’ Produce Trade and Commerce (Promotion and Facilitation) Act, 2020; the Farmers’ (Empowerment and Protection) Agreement on Price Assurance and Farm Services Act 2020; and the Essential Commodities (Amendment) Ordinance 2020.

They were introduced with the aim of enabling farmers to sell their produce to any seller across the country and deal with private companies directly instead of operating through government-regulated wholesale markets.

However, the farmers fear that opening the agricultural markets to private companies directly will end the MSP – or the State procurement system.

Eleven rounds of talks between farmers and the government have already taken place although, so far, each has resulted in stalemate.