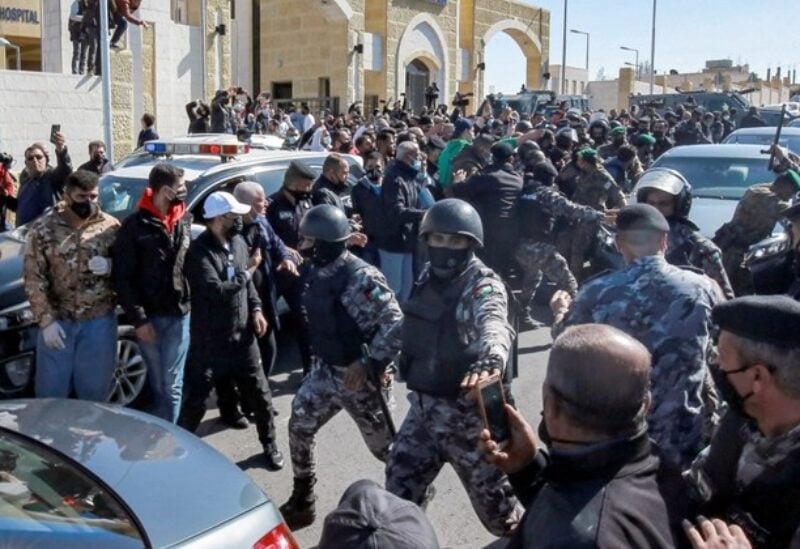 Members of Jordan's police keep demonstrators away outside al-Hussain New Salt Hospital in the town of Salt, northwest of Jordan's capital, on March 13, 2021, as people protest the deaths of of COVID-19 patients who died of lack of oxygen.

The Jordanian health ministry held a meeting on Sunday with directors of hospitals, after which 14 recommendations were made in order to prevent the recurrence of a painful incident in hospitals after 7 patients died at Salt Hospital due to oxygen outage.

During the meeting, it was recommended that oxygen levels, power generators and UPS systems should be monitored on a daily basis, and that a WhatsApp group should be created including the concerned hospital directors so as to daily inspect oxygen and electricity and to take all necessary precautions.

“Oxygen levels should be monitored several times a day by a specific someone and all procedures must be documented, the meeting’s officials said.

The director and 4 other officials of a Jordanian hospital treating COVID-19 patients were arrested on Sunday over deaths at the facility after it ran out of oxygen, judicial sources reported.

A prosecutor decided to place them in custody for a one-week period for questioning after 7 patients died Saturday in the hospital in Salt, near Amman, the sources said.

Public outrage over the deaths prompted health minister Nazir Obeidat to step down, and King Abdullah II, who visited the state hospital on Saturday, ordered its director Abdel Razak al-Khashman to also resign.

The head of health services for the province where Salt is located has likewise been suspended pending the completion of an investigation.

In video footage posted online, a visibly angry Abdullah, shaking his head, is heard telling the hospital director: “How could such a thing happen? This is unacceptable.”

Hundreds of people rallied outside during the visit to vent their disgust and resentment.

The 2 houses of Jordan’s parliament were to hold emergency sessions Sunday on the Salt hospital deaths.

They came as the daily virus caseload in Jordan has surged in recent weeks, prompting authorities to reimpose curbs, including an all-day curfew on Fridays, the day of rest.

Jordan, which launched its coronavirus vaccination drive in January, has recorded at least 460,000 COVID-19 cases and over 5,200 deaths.