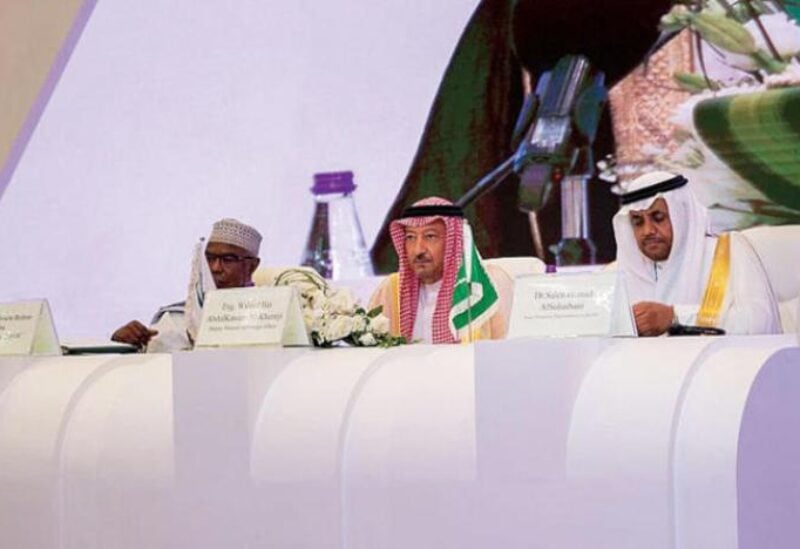 Saudi Deputy Foreign Minister and Secretary-General of the Organization of Islamic Cooperation at the fourth OIC Conference on Mediation on Sunday. (SPA)

The conference, “Experiences and Prospects,” was organized by the Saudi Ministry of Foreign Affairs in collaboration with the OIC in Jeddah.

OIC Secretary-General Hissein Brahim Taha said mediation is a key for the organization, noting that the conference is being held at a critical time as the world is in dire need for mediation, negotiationd and dialogue to resolve disputes and conflicts.

He pointed out that the organization’s member states have a strong commitment to resolving conflicts in a peaceful and lasting manner because “60% of the world’s conflicts across the world are happeing within the OIC zone.”

Taha said the OIC charter underscores the importance of bolstering ties among states based on justice, mutual respect and good neighborliness to ensure peace, security and general harmony across the world.

Regarding the peaceful settlement of disputes, he remarked that the charter requires member states to pursue peaceful ways through good offices, negotiation, investigation, mediation, conciliation, arbitration, judicial settlement or any other similar means.

Moreover, he stressed that conflicts have exposed people to many bitter experiences and led to the decline in comprehensive development in their countries.

The Organization has also played a key role in supporting international efforts aimed at establishing peace in Somalia, Guinea, and Iraq, he added.

“We have played a major role in addressing the tense situation faced by the Muslim community in Sri Lanka due to some organized activities against Muslims by Buddhist monks in wake of the brutal suicide attacks on churches and hotels on April 21, 2019,” Taha said.

“We also intervened to correct the discriminatory policies and practices adopted by the government of Sri Lanka to cremate the corpses of the victims of the COVID-19 pandemic, which are incompatible with the rights of Muslims in Sri Lanka,” he continued.

He lamented that the majority of conflicts happen in the Islamic world.

Furthermore, he stated that Saudi Arabia has long provided all forms of support and mediation to resolve conflicts across the world to achieve international peace and security.

The Kingdom has contributed through the King Salman Humanitarian Aid and Relief Center and the Saudi Fund for Development in resolving several crises, becoming one of the top humanitarian donors in the world.