9 Killed in Protests against Kurdish Administration in Aleppo Countryside 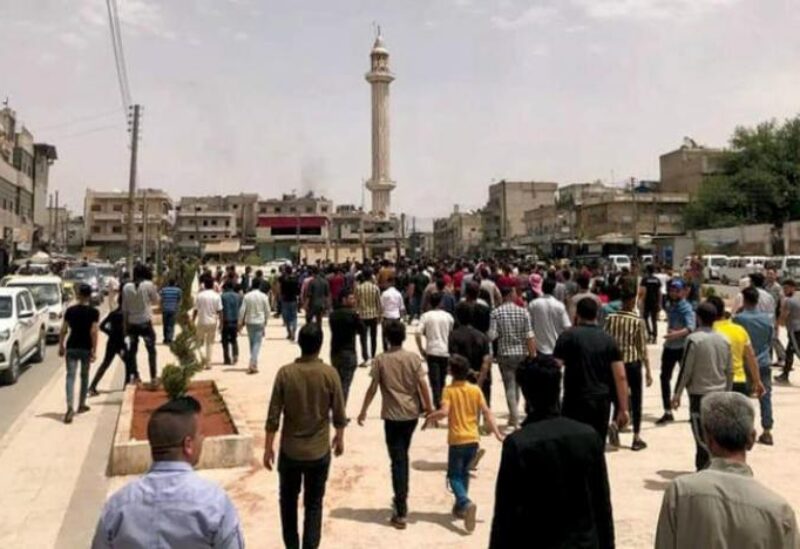 At least nine civilians were killed and hundreds injured in protests that have swept the Syrian city of Manbij, east of the Aleppo governorate, since Monday.

In a statement, the Kurdish Civil Administration pledged to “fulfill the demands of the demonstrators, serve the interests of the citizens and thwart saboteurs, who seek to meddle with stability and security in northern and eastern Syria.”

Thousands of demonstrators gathered in the city center of Manbij and at the Al-Khataf checkpoint, calling on the authorities to arrest those involved in the killing of protesters, abolish the forced conscription law and increase the city’s share of fuel.

Manbij has been witnessing a stifling crisis due to the lack of fuel and energy derivatives.

On Monday, mass demonstrations took place in the village of Al-Hudhoud, about 6 kilometers east of Manbij, rejecting the forced conscription. Witnesses and activists reported that the Internal Security Forces fired live bullets at the protesters, wounding dozens of people and killing one civilian.

Similar demonstrations took place at Al-Khataf checkpoint. Eyewitnesses reported that the demonstrators had taken control of the checkpoint, but the security forces brought in military reinforcements and opened fire, which led to the killing of two civilians.

Meanwhile, the Manbij Military Council, which is allied with the Syrian Democratic Forces, backed by the international coalition led by Washington, denied reports about the killing of civilians and the targeting of peaceful protests.

In a statement, the council accused the regular forces deployed in the vicinity of the area of “killing a young man and wounding three others as one of their cars was passing through the village of Al-Hudhoud.”

The council called on the residents of Manbij and its countryside to beware of “sedition attempts and those who want to tamper with the security and stability of the region.”

The Civil Administration in the city has since ordered a 48-hour curfew after the eruption of the protests.