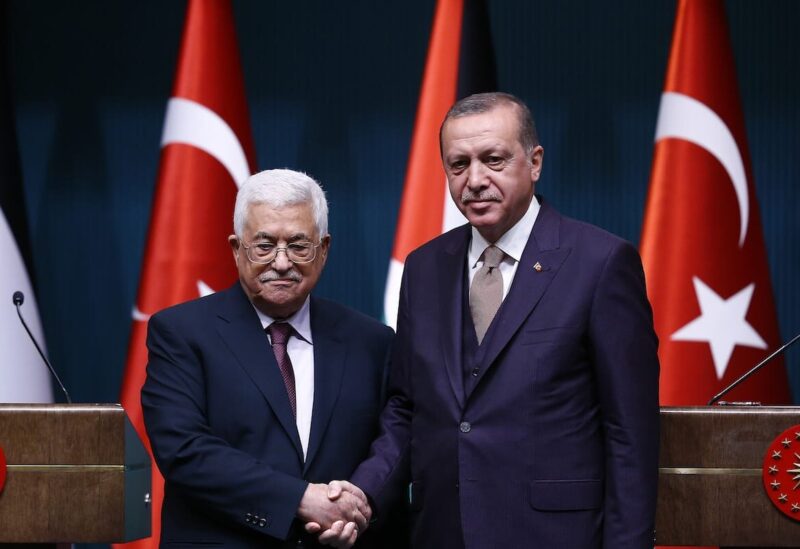 Both leaders discussed the latest developments in the Palestinian arena during the meeting, including the unstable situation due to the anti-PA demonstrations in the occupied West Bank and the continuous Israeli aggression on Palestinians.

PA sources reported that Abbas arrived in Istanbul on Friday night for a three day visit at the invitation of Erdogan.

Due to Erdogan’s good relations with Hamas, Abbas asked him to pressure the Palestinian movement to stop incitement against the PA, according to Palestinian sources.

Abbas and his aides claim that Hamas is fueling the anti-PA and Fatah campaign that erupted in the occupied West Bank in the wake of the PA murder of Palestinian activist Nizar Banat.

Meanwhile, Abbas and Erdogan discussed how to return to reconciliation talks between Fatah and Hamas, with Abbas requesting Erdogan’s mediation.

One of the ideas discussed was the formation of a national unity government with international support in order to unite the Palestinian institutions, supervise the reconstruction of Gaza and prepare for the general elections prior to agreeing on mechanisms to allow Hamas and Islamic Jihad to enter the Palestine Liberation Organisation (PLO).

Fatah officials told Al-Quds Al-Arabi that the PA delegation was content with the outcomes of the meeting with Erdogan, noting that he pledged to increase Turkish support for the Palestinian cause and to continue economic support for Palestinians.

It is worth noting that Banat’s brother Ghassan appealed to Erdogan prior to Abbas’s visit to: “Stand with the demonstrators who took to the streets to protest the death of my brother.”

Speaking to Al-Aqsa TV, Ghassan added: “Abbas’s authority must admit that what happened was a political crime. He and his security establishment bear the responsibility for the repercussions of this crime.”

He added: “The Palestinian political system must be reconstructed on the basis of free and transparent elections that will be held under the supervision of the international community.”