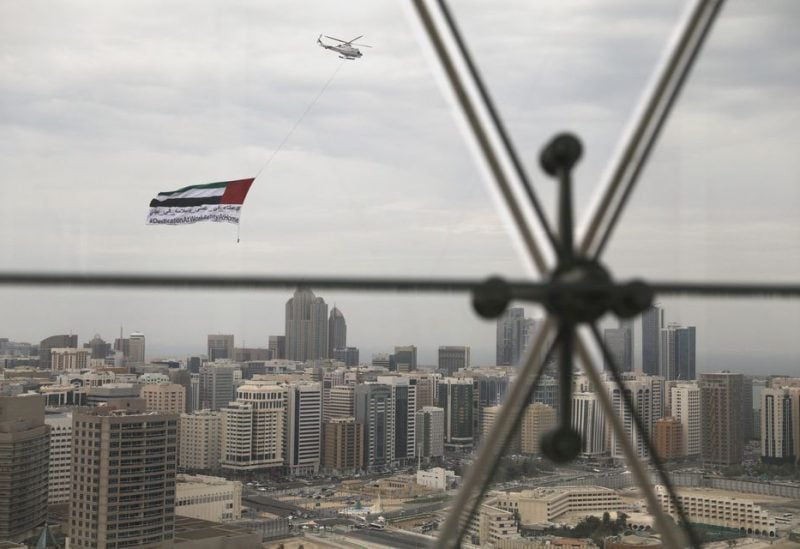 A helicopter flies over the downtown skyline, amid the coronavirus disease (COVID-19) outbreak, as seen from the Cleveland Clinic hospital in Abu Dhabi, United Arab Emirates, April 20, 2020. REUTERS/Christopher Pike

Abu Dhabi’s shift in strategy to invest across the region through its sovereign wealth fund ADQ reflects the Gulf oil producer’s effort to use economic diplomacy to build regional alliances ranging from Turkey to Israel and Egypt, according to three sources.

After years of appearing to favor more hard-edged, even militarized methods of gaining influence in the Middle East and North Africa, the change suggests a greater use of soft power by Abu Dhabi, the richest emirate in the United Arab Emirates federation.

ADQ, the smallest of Abu Dhabi’s three main sovereign wealth funds, began in 2018 as a vehicle for holding state assets.

But it has since expanded overseas. ADQ, estimated by Global SWF to manage $108 billion in assets, lined up 25 investments worth about $6.6 billion from Jan. 1 to Oct. 1 this year, making it among the most active dealmakers in the Middle East.

“The region is a priority. They want to have strong political ties with these countries,” one of the three sources told Reuters, speaking on condition of anonymity.

ADQ and the UAE foreign ministry did not respond to emailed requests for comment.

Abu Dhabi had pursued a hawkish foreign policy as it moved in recent years to contain Iran’s growing sway in the region and counter the rise of political Islamist movements.

The hardline tone chimed with the inflexible style of then U.S. President Donald Trump, who cast Iran as a villain and tore up a deal aimed at stopping it from developing nuclear weapons.

But military adventurism that saw the UAE wade into conflicts from Yemen to Libya and join an Arab boycott of Qatar brought little gain and caused strains with Western allies.

Abu Dhabi forged ties to Israel in 2020 while engaging with Iran to manage tensions and moving to mend fences with Turkey and Qatar after years of animosity over Islamism.

Among recent deals, ADQ launched a $300 million technology fund in March with Turkey’s sovereign wealth fund to invest in venture capital funds and opportunities inside Turkey.

It has invested in UAE ally Egypt, and other Arab states such as Syria — still under tough Western sanctions — and Iraq are on its investment radar, two of the sources said. It has also signed deals with Israel.

“The UAE now is using its huge financial, economic power to reach the same goal” that it had pursued using “hard power”, said Abdulkhaleq Abdulla, an Emirati political analyst. Abdulla defined this goal as the UAE’s “vision for a stable and moderate Middle East and for promoting the UAE’s national interest.”

He said ADQ was acting in a similar way to another of emirate’s sovereign funds, Mubadala, saying both had a “political leg and an investment leg”.

“They are the ones that promote UAE economic diplomacy, its regional and global influence,” he said.

ADQ’s strategy has similarities to one by Mubadala, which invests around the world, including locally and regionally, although its portfolio is skewed towards the U.S. and Europe while ADQ focuses mainly on national champions and the region.

ADQ insists its mandate is purely commercial, according to people close to the company, although its chairman Sheikh Tahnoon bin Zayed al-Nahyan, who is UAE national security adviser, has been a foreign policy troubleshooter for his half-brother MbZ as well as being a prominent businessman.

Sheikh Tahnoon likes to keeps his roles separate, though attends board meetings, said a source familiar with ADQ’s strategy.

“He (Tahnoon) is a strategic pragmatist … he has immensely powerful external networks that are instrumental for Emirati statecraft,” said Andreas Krieg, associate professor at King’s College in London.

Sheikh Tahnoon visited Turkey and Iran as the UAE moved to engage with them; after meeting him in August 2021, Turkish President Tayyip Erdogan said that if talks continued “in a good way”, the UAE would soon make “serious investments”.

It consolidated and privatised some of those assets, using local equity listings to build domestic champions, and then began its push into companies outside the UAE, often choosing markets battered by high inflation or currency devaluations.

In April, it sank almost $2 billion into five publicly traded companies in Egypt, which was on the hunt for foreign exchange after Russia’s invasion of Ukraine prompted foreign investors to pull billions from its treasury markets.

“Between 80% and 90% of large, strategic deals – like in energy – are agreed top-down, at a government-to-government level. The rest are proactive – ADQ sees an opportunity and moves on it,” a third source said.

Like other wealthy Gulf states, the UAE now prefers to invest rather than extend direct financial aid to allies, to avoid corruption and inefficiency and reap benefits of its own. ADQ’s investments are mostly in sectors of national interest to the UAE such as energy, logistics, healthcare and food security.

“No one gives cash nowadays. It’s very rare when it happens. This is gone I think. They’ve learned the lesson,” the third source said.