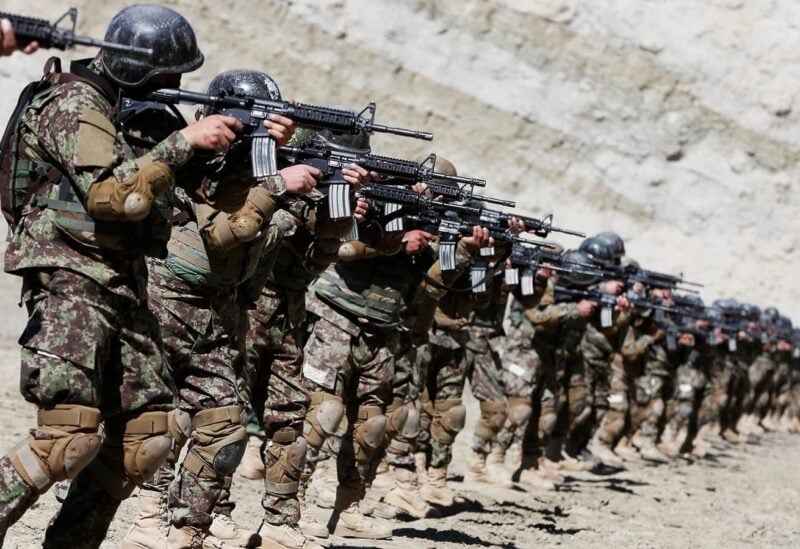 Between the Hesco blocks and makeshift barricades at a checkpoint near the village of Arghandeh, Afghan police and soldiers keep watch for Taliban activity.

About 100,000 vehicles pass through the roadblock every day, the police said. It is one of six gates controlling the major roads leading to the Afghan capital and often comes under attack.

Security forces and civilians alike say the Taliban have encircled Kabul and have already begun infiltrating the outer suburbs of the Afghan capital as the withdrawal of US forces approaches.

Most people agree that the withdrawal on September 11 could lead to Taliban political dominance, and with many of the old warlords still vying for power and the longevity of the current government uncertain, some fear that Afghanistan could collapse into chaos or even a civil war.

On the day The National visited, thick storm clouds had rolled over Arghandeh, in the Paghman district on Kabul’s south-western edge, as security personnel checked dozens of cars for explosives and weapons at the checkpoint.

The road through the checkpoint becomes a dusty and uneven track shortly after passing the city’s boundaries, and leads out towards Wardak province and, eventually, to Kandahar – once the Taliban’s heartland.

Cars and trucks arrive from as far away as Spin Boldak on the border with Pakistan, where explosives and weapons are regularly smuggled into Afghanistan.

Kabul’s 6 million residents, who have witnessed a surge in violence in recent months, depend on the checkpoints for security.

The Arghandeh valley stretches far into the mountains that form a ring around Kabul.

The lower part of Arghandeh is still secure, but the upper part, in the hills, is “full of Taliban,” said Nurullah Wafa, 21, a soldier with the Afghan National Army (ANA), adding that he and his fellow soldiers were involved in frequent firefights.

Beside the checkpoint is a small base where the soldiers are stationed.

Its parking space was filled with Humvees, an ambulance and several dozen soldiers who either patrol the area or guard the outpost.

“The Taliban has snipers in this area too,” Mr Wafa said as he crouched while walking around the base’s highest point.

The Taliban forces operating in the area often set up their own checkpoints and plant bombs. Even further down the road, the militants have blown up several bridges.

The army and police stationed at the Kabul gates say the Taliban is at the doorstep.

But while the soldiers don’t feel safe, neither do civilians in Paghman district.

In Bektuk village, a picturesque cluster of green gardens and mud-walled houses, a group of teenage girls are on their way home from school in their black uniforms and white scarves,.

Shekiba Kadir, 18, said she was due to finish high school in a few weeks but no longer felt safe in the village.

“A few days ago, two IEDs were planted on the road I take to school,” she said, adding that they were later defused by the army, who were the apparent targets of the bombs.

“Since that day, I don’t feel safe anymore even going to school. It’s a short walk, maybe about 10 minutes, and now I keep checking the sides of the road and walk carefully.”

“Refer to me as Ajmal in your story,” he instructed, fearing that revealing his real name would put him in trouble as he regularly has to negotiate with the militants.

Bektut is being kept safe by a small checkpoint, manned by 12 soldiers who were previously part of the Afghan local police. Once a US-funded unit, the local police forces were dismantled last year and the majority of their members integrated into the army.

The soldiers in Bektut said the Taliban were pushing forward with greater force than in previous years. They recently dug a small trench next to their outpost to help them repel militant attacks.

A neighbouring post on a hilltop was attacked within the last two weeks, they said, leaving one soldier dead and three injured.