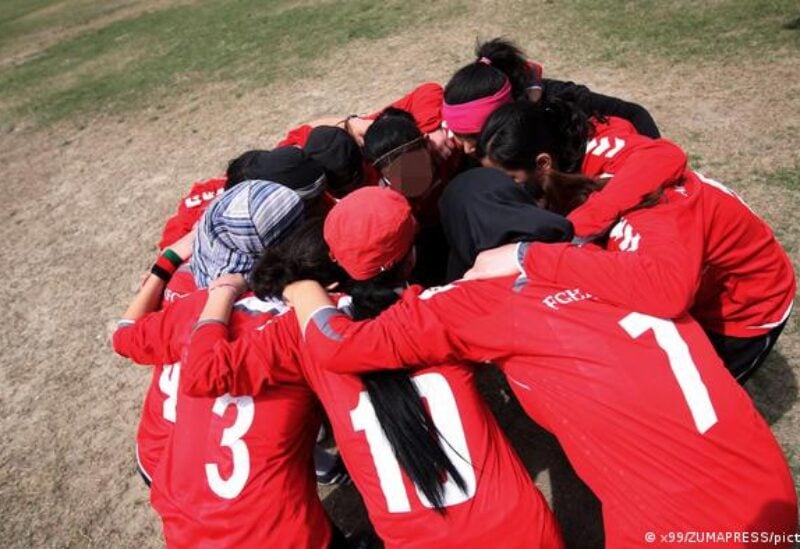 Since fleeing from the Taliban, members of the Afghan junior women’s football team have been staying in a Lahore hotel, now they have asked the UK government for asylum, as will need to leave Pakistan once their emergency visas expire on Oct.12.
The 35 girls, who are aged 13-19, plus 94 coaches and family members, have been financially supported by the ROKiT Foundation, and offered assistance by figures in the UK, including Conservative MP Tom Tugendhat and the owner of Premier League side Leeds United, Andrea Radrizzani.
They cannot return to their homes as they face persecution from the Taliban.
One of the girls, called Narges, told Sky News: “The only thing all of us know is that we don’t want to go back to Afghanistan again. If you can accept us we would be really happy that we can live in the UK and have the UK as a host country for us.
“The only thing we want from your government and your humanitarian institutions is to find a host country for us in order to help us to be happy again and be alive again, to make a new life and be good football players in the future.”
The UK has pledged to house 20,000 Afghans in the next few years, following the withdrawal of coalition forces, and the collapse of the Afghan government earlier this year.
Tugendhat said: “I’ve had … a series of conversations with various members of the Cabinet about these girls and this group and I know that there’s a lot of support. What we need to do now is just get it over the line, make sure that these individuals are recognized as part of the government’s commitment.”
The senior women’s team was granted asylum in Australia, but the junior team faced an ordeal leaving Afghanistan after the chaotic way the capital fell to the Taliban, having to hide and then facing issues crossing the border with Pakistan.
Narges said: “The Taliban were violent. They threatened us: ‘We don’t know who you are but if you cannot pass the border we will kill all of you here.’ It was so hard for us to leave the place where you were born and you grew up. Still there isn’t any country to accept us as refugees. We don’t know after these days what would happen to us and what we can do.”
The girls said that, above all else, they just wanted to study and be allowed to play football.
“We were playing football in a backward country like Afghanistan, a country where they don’t believe in women, they have to stay at home,” Narges said. “In such a harsh situation we were playing football we love. We really love football. It means freedom for us. When we are together, we feel we are alive.”
Siu-Anne Marie Gill, CEO of ROKiT Foundation, said: “These girls, who have tremendous courage … can enrich a community. We would love to have the UK government offer them a visa. They will be taken back to the border if we can’t find a host country to take them on.”